You are here: Home / Senza categoria / Of misogynistic jihadists and their sexual jihad 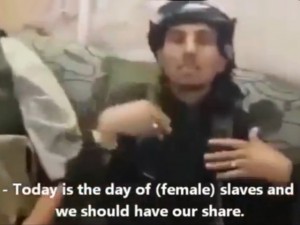 Whether it’s the destruction of holy shrines, burning of hostages, stoning the accused and sexually assaulting girls, the Islamic State of Iraq and Syria (ISIS) has managed to set new boundaries and records of violence. Adding to their records is the recent execution of 19 girls in Mosul who refused to have sex with the group’s fighters. This is an extension of the sheer brutality that is normally attributed to them.

Countless women have been abducted by the ISIS militants. The prettiest of the abducted virgins are then sent to the markets of Syria and Iraq where they are sold as sexual objects to the highest bidder, amongst the beasts salivating to get the best of the prey.

When the ISIS took over the city of Mosul, the group demanded that people handover their unmarried daughters for their fighters:

“We call upon the people of this county to bring their unmarried girls so they can fulfil their duty in sex jihad for their warrior brothers in the city and anyone who will not appear will feel the full force of the Shariah law upon him.”

These men are not Norsemen raiding other lands, plundering and enslaving women. They’re not even those savage tribes of Caucasian steppes invading peaceful cities, and this is not even the fictitious story of the Game of Thrones, famous for showing disturbing and explicit scenes and events, but the similarity is striking. This is reminiscent of medieval men possessing the arms of the 21st century.

Sexual jihad, as they call it, is the alleged volunteering of women to provide sexual comfort to the men fighting for the establishment of the Islamic rule. The term is, without a doubt, a slander against the Islamic teachings and greatly distorts the meaning of the word jihad. The issue came up when Tunisian women, who supported the jihadi movement, volunteered for the jihadists in Tunisia and Syria. The ISIS incorporated this concept and legalised it in their self-proclaimed state.

But I disagree. Sexual jihad isn’t the volunteering of a woman with her own consent but is a forceful conduct as was the case with those unfortunate 19 girls. It isn’t a choice. The ISIS has even published a sickening guide to capture, punish and enslave non-believing women, outlining how to use them as sex slaves while also justifying child rape.

These jihadists are cold-blooded, sectarian, patriarchal, and mass murdering pedophiles who know nothing of the religious scripture. Their continued treatment towards women is a reflection of their mind-set. To them, women are nothing but objects or meat to gratify men, the powerful gender. A woman who denies presenting herself for this purpose is legitimate to undergo brutal punishment, which includes beheading, stoning, flogging and crucifixion. It will not be overstatement to state that women are treated as cattle. Even those young girls who have not reached puberty have been reported to be raped, as was the case with the nine-year-old who became pregnant after 10 ISIS militants raped her. This is an outright violation of the Islamic conduct and respect the religion tries to advocate for the female gender.