You are here: Home / Senza categoria / Obama’s expert on the Islamic State is about to step down 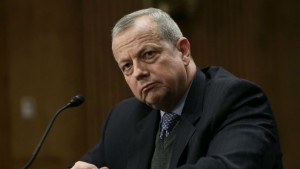 President Barack Obama is about to lose the man he hand-picked to build the war effort against the Islamic State. Retired Gen. John Allen will be stepping down as envoy to the global coalition this fall, and the White House is searching for a replacement to be the face of America’s flailing effort to destroy the jihadist group in Syria and Iraq.

Allen will leave government service in the coming weeks, four administration officials told us. State Department officials said they were not ready to officially announce Allen’s departure, but he has notified his superiors that he will give up his job in early November, after serving just over one year. His chief of staff, Karin von Hippel, also will depart, to join a British think tank.

The timing of Allen’s departure could not be worse for the Obama administration. The incoming Marine Corps Commandant, Lt. Gen. Robert Neller, testified last month that the war is at a “stalemate.” Last week, the head of the U.S. Central Command, Gen. Lloyd Austin, testified that of the 54 Syrian rebels trained and equipped by the U.S. military, only “four or five” were still in the fight. And now the Pentagon is investigating allegations by dozens of intelligence analysts that their reporting on the progress in the war effort was altered before being given to top officials.

U.S. officials familiar with Allen’s decision say he has been frustrated with House micromanagement of the war and its failure to provide adequate resources to the fight. He unsuccessfully tried to convince the administration to allow U.S. tactical air control teams to deploy on the ground to help pick targets for air strikes in Iraq. Allen also tried several times to convince the White House to agree to Turkish demands for a civilian protection zone in Syria, to no avail. Nonetheless, administration officials stress that Allen’s decision to leave his post was motivated mainly by the health of his wife, who has an autoimmune disorder.

“John Allen has put his heart and soul into trying to make the president’s strategy work,” said Derek Harvey, a former senior U.S. military intelligence official who worked with Allen at U.S. Central Command. “I have sympathy for the hard task he was given because I do not believe the president’s team was fully on board and he was never empowered to bring the leadership necessary to achieve the mission.”

While Allen was working inside the administration, the White House could rely on him to push back against many others in the U.S. national security establishment who argued that Obama was not fully committed to his strategy to degrade and defeat the Islamic State. Earlier this month, he told ABC News that there had been many successes in the war, and he focused on setbacks for the terror group in Tikrit, Iraq, and Kobane, Syria.

“Where we were a year ago today, I wasn’t sure how it was going to unfold,” Allen said. “It was not clear to me even that Iraq would survive this. In the intervening months, we’ve seen remarkable progress in many respects.”

Allen was successful in negotiating the deal whereby Turkey is now allowing the U.S. to use the Incirlik Air Base for air operations in Syria. But the broader campaign against the Islamic State has been stymied. The Turks recently launched an offensive not against the jihadists but against Kurdish separatists, who have been important allies to the U.S. on the ground. As Islamic State forces have expanded and consolidated territory in Syria, they have managed to keep control of Iraq’s second-largest city, Mosul, and expand into Ramadi, the heart of the 2007-08 Sunni-led rebellion against al-Qaida in Iraq, the predecessor organization to the Islamic State.

“Some elements of the right strategy are in place, but several are under-resourced while others are missing,” David Petraeus, the former general and Central Intelligence Agency director, testified Tuesday before the Senate Armed Services Committee. “We are not where we should be at this point.”

When Allen was named to his post in September 2014, he initially planned on staying for six months. He agreed to stay on for another six at the request of Secretary of State John Kerry earlier this year. In the short term, his responsibilities are expected to be passed on to his deputy, Ambassador Brett McGurk. But the White House eventually wants to find a big-name replacement for Allen, who as a four-star Marine Corps general led the international force in Afghanistan from 2011 to 2013.

Finding someone to take the job won’t be easy. Just before he became Obama’s lead official in the fight against the Islamic State, Allen wrote an op-ed article in which he called the group a “clear and present danger to the U.S.” and said it “must be destroyed” quickly, using capabilities and power only the U.S. can bring to bear. Just over one year later, the president has yet to commit to a real plan to “degrade and destroy” the Islamic State, as he has repeatedly said is his goal. Until that changes, Allen’s replacement will face the same roadblocks that he did, and the war against the Islamic State will continue to flounder.