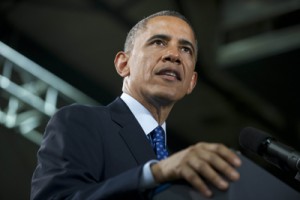 President Barack Obama will present the Iran nuclear debate as the most momentous US foreign policy decision since the Iraq war Wednesday, in a fresh history-evoking bid to win support.

In the address to the American University in Washington, Obama will frame Congress’ polarizing debate over the deal as “the most consequential” since lawmakers in 2002 backed George W. Bush’s drive to war, according to a White House official.

Obama has long argued that vote represented a grave mistake that pushed the United States into eight blood-soaked years of unneccessary conflict.

“He will point out that the same people who supported war in Iraq are opposing diplomacy with Iran, and that it would be an historic mistake to squander this opportunity,” the official said.

Obama has fervently argued in favor of the agreement that would give Iran sanctions relief in exchange for curbs on a nuclear program which the United States has long suspected is cover for building a bomb.

Positing the unpopular Iraq war as a cautionary tale, Obama is likely to recall John F. Kennedy’s efforts to curb nuclear tests as a more worthy example to follow.

Months before his assassination, Kennedy used the same university venue to vehemently argue for peace with the Soviet Union in the face of panic over a nuclear conflagration.

In a 1963 commencement address, Kennedy cautioned against brandishing US power to bring about the “peace of the grave or the security of the slave.”

Instead, he announced diplomatic efforts to check “one of the greatest hazards which man faces in 1963, the further spread of nuclear arms.”

Obama has argued that the alternative to a negotiated nuclear deal with Iran is military action, something his critics angrily denounce as a false dichotomy.

The alternative to a bad deal, they say, is a better deal.

The debate has split Congress largely — although not exclusively — along party lines, with Republicans, who are in the majority, staunchly against.

That means Obama will need to win the support of fellow Democrats in order to avoid having the deal struck down by lawmakers.