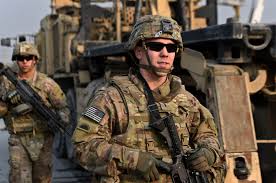 Fifteen years into the war that few Americans talk about any more, conditions in Afghanistan are getting worse, preventing the clean ending that President Barack Obama hoped to impose before leaving office. Violence is on the rise, the Taliban are staging new offensives, the Islamic State group is angling for a foothold and peace prospects are dim.

Afghanistan remains a danger zone. It’s hobbled by a weak economy that’s sapping public confidence in the new government. Afghan police and soldiers are struggling to hold together the country 13 months after the U.S.-led military coalition culled its numbers by 90 percent.

“I don’t see any drawdowns” in the near future, said James Dobbins, Obama’s former special envoy for Afghanistan and Pakistan. He predicted Obama would leave the decision to the next president.

“They are just hoping that things hold together and they won’t have to face a decision on whether to actually implement the force reduction they’re talking about until late summer, early fall, by which time the administration will be on its last legs,” Dobbins said.

Top military officials, as well as Republicans and Democrats in Congress, think that trimming the force any more during Obama’s presidency is a bad idea. Republican Sen. John McCain of Arizona, chairman of the Senate Armed Services Committee, said Thursday that Afghanistan was in a “crisis situation.”

“As the security situation in Afghanistan continues to deteriorate, it makes no strategic or military sense to continue the withdrawal of American forces,” said McCain, who frequently criticizes Obama’s national security policy.

It’s been a tough year on the Afghan battlefield.

Afghan soldiers and policemen – bankrolled by $4.1 billion in U.S. taxpayer money – fought virtually on their own last year for the first time since the U.S. invasion in 2001. NATO officials have told The Associated Press that Afghan troops are displaying prowess, but suffering sustained heavy casualties – 28 percent higher in 2015 than before the international combat mission ended in December 2014.

Lt. Gen. John “Mick” Nicholson, Obama’s pick to be the next top U.S. commander in Afghanistan, said at his Senate confirmation hearing Thursday that the Afghan security forces have “more than held their own against the insurgency,” but are not yet “self-sustainable.”

Asked whether the U.S. effort in 2015 had resulted in gains or losses, Nicholson replied: “The Taliban came at the Afghan security forces more intensely than perhaps we anticipated. Because of that, we did not make the advances we … thought we would make.”

When U.S. and other foreign troops left on an announced schedule, the Taliban pounced.

Last fall, the militants briefly seized Kunduz, a city of 300,000 in northern Afghanistan. It marked the Taliban’s first capture of a major city since before the U.S.-led invasion and was marred by the mistaken U.S. strike on a charity hospital run by Doctors Without Borders, killing 42 people.

Hamdullah Mohib, Afghanistan’s ambassador to the United States, acknowledged that Kunduz was a setback. But he said it also reminded Afghans what life was like under the Taliban.

“They don’t want to return to that,” he said.

In the south, Afghan army units have been engaged in fierce fights with the Taliban for months in Helmand province, where militants sow more than $3 billion a year in opium revenue.

The Afghan army in Helmand has been plagued by incompetence and ineffectiveness, partly due to corruption among top officers who are suspected of siphoning off money from salaries, food, fuel and equipment. In recent weeks, the Afghan military has fired and replaced top Afghan army leaders there.

Also in the south, U.S. and Afghan forces last year killed 150 to 200 al-Qaida members in a large training camp, complete with tunnels, that was discovered in neighboring Kandahar province, another militant stronghold. Seth Jones, a RAND Corp. analyst who served as an adviser to the U.S. military in Afghanistan, noted that at the beginning of the Obama administration, the U.S. talked of there being fewer than 100 members of al-Qaida in Afghanistan. “Now we’re talking about 200 in Kandahar province alone?”

The Defense Department told Congress in a report last month that violence is rising in much of the country and the Taliban can be expected to build momentum. It also portrayed the Afghan forces as favoring a defensive crouch that limits their ability to go after the Taliban in some areas.

In a different report to Congress this week, the U.S. government’s Special Inspector General for Afghan Reconstruction said the Taliban now control more territory than at any time since 2001.

A current Afghan official, who spoke on condition of anonymity because he was not authorized to speak to the media, acknowledged the army’s many setbacks this year, but said the Taliban had sought to achieve major victories after the U.S.-led coalition announced it would end its combat mission on Dec. 31, 2015. Instead, they failed to retake huge swaths of land, he said.

He also noted that Afghan plans to shift its military from a conventional force to one that’s more mobile and nimble to respond to the guerrilla-type warfare conducted by the Taliban. He said 2016 “is going to see some changes.”

Obama already backtracked once on drawing down the American force.

Initially, he had announced plans to reduce the force to 5,500 troops by the end of last year, and to 1,000 by the end of 2016. Last fall, Obama changed his mind, saying the situation remained too fragile for the American military to leave. He announced plans to keep the current force of about 9,800 in place through most of 2016 to perform not in an offensive combat role but to continue counterterrorism missions and advise Afghans battling a resurgent Taliban.

While the Taliban is fighting turf battles against IS in some places, the Afghan and U.S. forces worry that the brutal militant network – estimated at 1,000 to 3,000 strong in Afghanistan – could gain a foothold, cause further instability and use Afghanistan as a new base from which to plan attacks on the West.

The Obama administration recently expanded the U.S. military’s authority to offensively target IS militants in Afghanistan in addition to al-Qaida.

If security is weak, the economy might be worse.

Mohammad Qayoumi, an Afghan native who left his job as president of San Jose University in California to advise President Ashraf Ghani, said that when the bulk of the foreign forces left the country, 500,000 Afghan jobs were lost. But he said the Afghan government has many economic development projects in the works to help wean the nation off international assistance.

Qayoumi, who briefed reporters recently in Washington, rattled off a list of infrastructure and construction projects planned. “No country has gone from poverty to prosperity through grants and aid,” he said.