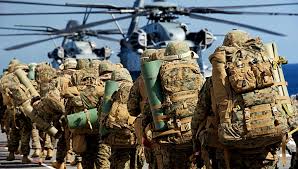 President Obama has extended the U.S. military’s combat mission in Libya for another month at the request of senior military leaders, two defense officials with knowledge of the order told Fox News.

The decision keeps two U.S. Navy warships off the coast of Libya to continue striking ISIS and assist Libyan ground forces fighting the terror group in the coastal city of Sirte.

One of the U.S. warships had been scheduled to go to the Persian Gulf in September to begin airstrikes against ISIS in Iraq and Syria and keep an eye on Iran, a week after four provocations between Iranian gunboats and U.S. Navy ships — one of which resulted in warning shots being fired by a U.S. warship. The other, a U.S. Navy destroyer, was supposed to head to the Black Sea near Russia next month. But both plans will be put on hold, according to one defense official.

USS Wasp, a large amphibious assault ship loaded with over 1,000 Marines as well as Harrier jets and Cobra attack helicopters, will remain off the coast of Libya – as will her escort ship, USS Carney, a guided-missile destroyer.

“The destroyer is close enough to be seen from shore,” one defense official said.

U.S. Marine Corps jets and attack helicopters from USS Wasp have conducted 92 airstrikes against ISIS in Libya as of Monday, according to statistics provided from the U.S. military’s Africa Command.

Marine Harrier jets have conducted 124 missions over Libya against ISIS since airstrikes began on Aug. 1. Marine Cobra attack helicopters have flown 31 missions as of Tuesday, according to statistics provided by one defense official who requested anonymity.

Another defense official told Fox News he expected U.S. airstrikes to be ending soon because ground forces loyal to the U.N.-backed government in Tripoli which the U.S. military is supporting is now in control of 90 percent of Sirte. The Libyan city is located roughly halfway between Tripoli and Benghazi on the Mediterranean coast.

Earlier this week, Libyan forces suffered heavy casualties while fighting ISIS, according to reports. According to the BBC, 34 Libyan soldiers were killed and 150 wounded in recent fighting.

Estimates about the ISIS presence in Libya vary. In June, CIA Director John Brennan said there were 5,000 to 8,000 fighters in Libya. Recently, U.S. military officials said only “hundreds” remained in the ISIS-stronghold of Sirte, but did not have estimates for the rest of the country.

Neither the White House nor the Pentagon has officially disclosed the extension for the two U.S. Navy warships and airstrikes against ISIS there. The president’s initial authorization was for 30 days.