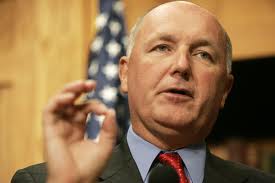 President Obama and former Secretary of State Hillary Rodham Clinton inherited a Libya in the midst of slow but sure liberalization — “a model ally” in fighting terrorists — and instead created a training ground for terrorists, the former chief of the House intelligence committee argues in a new book reviewing the evidence.

Former Rep. Pete Hoekstra, a Republican who spent 10 years on the committee with oversight of America’s clandestine operations, dubs Mr. Obama and his top diplomat, Mrs. Clinton, the “Architects of Disaster” — the title of a new book he’s written accusing them of bungling the run-up to war, wrongly ousting leader Moammar Gadhafi, then leaving the country a mess that has already come back to bite with the 2012 terrorist attack in Benghazi.

“How many are aware, for example, that Islamic terrorists almost surely got their hands on the remnants of Gaddafi’s chemical weapons arsenal of sulfur mustard gas, only about half of which had been destroyed at the time of the uprising?” Mr. Hoekstra argues. “The tragedy of misbegotten American policy in Libya continues to unfold, and only the most deluded optimists believe that there will not be more bad news to come.”

The book, which is being released Tuesday, was written for the Investigative Project on Terrorism, where Mr. Hoekstra is a senior fellow.

He argues, using publicly reported sources, that Mr. Obama and Mrs. Clinton should have seen Libya’s progress after the 2003 invasion of Iraq, which scared Gadhafi into ceding his nuclear weapons program and paying damages to the victims of the bombing of Pan Am flight 103 over Lockerbie, Scotland.

As a member of the intelligence committee, Mr. Hoekstra traveled to Libya in 2003, at the behest of the Bush administration, to determine whether Gadhafi’s conversion was real, and he says Republicans and Democrats on that trip unanimously concluded the Libyan leader had been scared straight — both by the U.S., and by fears of radical jihadists overthrowing him.

“Yes, Gaddafi was a monster, but he was our monster. In the ways that mattered most, he was preferable — immensely so — to many of those who brought him down, and the stability of

Libya under his control was preferable to the chaos that has followed,” the former congressman concludes. “Although NATO effectively brought down Gaddafi, it broke Libya but didn’t own it or do anything to fix it.”

With the exception of the investigation into the Benghazi attack, Libya has faded from the headlines as attention has turned to Syria, where the facts on the ground are strikingly similar: a regime intent on attacking some of its own citizens, a jihadist insurgency and an international community torn over how to react.

Despite the parallels, Mr. Obama has handled them very differently. In Libya he led a coalition to impose a no-fly zone that targeted Gadhafi’s forces, reversing the rebels’ fortunes and ensuring their victory. But in Syria the president has rebuffed calls for a no-fly zone and only tepidly backed rebels with a training program that after a year was so much of a failure the administration called it off last week.

The president, in an interview with CBS’s “60 Minutes” program this weekend, said he’s convinced the Islamic State insurgents will eventually fade.

Mr. Hoekstra argues Mr. Gadhafi was just such an anti-Jihadist partner in Libya, and he said the president’s inaction in Syria is hypocritical given the greater death toll there.

“President Obama broke Libya,” Mr. Hoekstra said, adopting the “you break it, you own it” school of war and foreign relations. “Worse, in this case, some would say that the United States actually supported the wrong side, overthrowing an ally in the war against radical Islam in favor of the jihadists.”

In a series of recommendations, Mr. Hoekstra cautions against the belief that U.S.-style democracy can be imposed, saying that local customs and traditions exist because they are embraced by the locals. American efforts, he said, need to adapt to that — much as the 2007 troop surge in Iraq did.

Mr. Hoekstra also briefly re-litigates the questions leading up to that war, saying that the answer to the question of whether the regime possessed weapons of mass destruction “is unclear,” even more than a decade later.

“As I learned back in 2005, as chairman of the House Permanent Select Committee on Intelligence, the military had unearthed hundreds of chemical weapons shells in Iraq, a discovery the Bush administration, foolishly preferring (as Karl Rove put it) to ‘let sleeping dogs lie,’ withheld from the public,” the former congressman wrote. (washingtontimes)