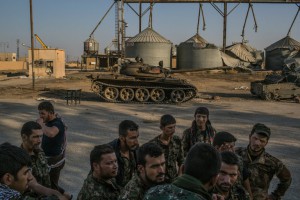 The Obama administration is weighing a military plan to directly arm Syrian Kurdish fighters combating the Islamic State, a major policy shift that could speed up the offensive against the terrorist group but also sharply escalate tensions between Turkey and the United States.

The plan has been under discussion by the National Security Council staff at a moment when President Obama has directed aides to examine all proposals that could accelerate the fight against the Islamic State, also known as ISIS or ISIL. Mr. Obama has told aides that he wants an offensive well underway before he leaves office that is aimed at routing the Islamic State from Raqqa, the group’s de facto capital in northern Syria.

Deciding whether to arm the Syrian Kurds is a difficult decision for Mr. Obama, who is caught in the middle trying to balance the territorial and political ambitions of Turkey and the Syrian Kurds, two warring American allies that Washington needs to combat the Islamic insurgency.

Directly providing weapons for the first time to the Syrian Kurds, whom American commanders view as their most effective ground partner against the Islamic State, would help build momentum for the assault on Raqqa. But arming them would also aggravate Mr. Obama’s already tense relations with Turkey’s president, Recep Tayyip Erdogan. The United States and Turkey sharply disagree over Syria’s Kurdish militias, which Turkey sees as its main enemy in Syria.

The plan has filtered up through the Pentagon’s Central Command, which oversees American military operations in the Middle East. It calls for providing the Syrian Kurds with small arms and ammunition, and some other supplies, for specific missions, but no heavy weapons such as antitank or antiaircraft weapons.

American officials note that the proposal has not yet been presented at the administration’s highest levels for decision. White House officials declined to comment on it.

The review of the military plan comes as American commanders fear that their timetable to take Raqqa was set back after Turkey recently plunged into Syria with ground forces for the first time. The Turkish offensive cut off a crucial Islamic State supply route but also rolled back the territorial gains of Kurdish militias, who despite help on the ground from American Special Operations advisers have criticized the United States for allying with Turkey.
American commanders view the plan to arm the Syrian Kurds, a minority group whose population straddles the border with Turkey, as an incentive to keep them on board for the fight against the Islamic State. Asked if the recent volatile military and political situation around the Syrian-Turkish border had slowed the pace for taking Raqqa, Gen. Joseph L. Votel, the head of Central Command, said last week that it might have.

“We don’t necessarily control the timeline ourselves,” General Votel told a security conference here sponsored by the Institute for the Study of War.

Associates of General Votel say he has expressed much greater concern in private over maintaining momentum in the fight against the Islamic State, especially if the Syrian Kurds and Turkey continue to clash with each other.

General Votel said last week, “We have to play a leadership role on both sides” — Turks and Kurds — “and keep focus on the mission to defeat ISIS.”

In the past two years the Pentagon has provided small arms, ammunition and other supplies to a group acceptable to Turkey — the Syrian Arabs, a minority in the Kurdish-dominated umbrella group that is fighting the Islamic State. About 350 resupply deliveries have been made by air or by land to the Syrian Arab militias, according to the American military command in Iraq.

But out of deference to Turkey, the United States has not directly armed the Kurdish fighters themselves.

Many analysts say the Pentagon’s support to the Syrian Arabs is basically cover for aid to the Syrian Kurds, who call the shots in the wider alliance, coordinate airstrikes with the United States, and are considered the most capable fighters. But arming the Kurds directly, even for just specific missions, would still be a significant shift practically and symbolically.

“If this happened, the fig leaf would disappear and it would be a very serious, contentious issue between the two countries,” said Soner Cagaptay, a specialist on Turkey at the Washington Institute for Near East Policy.

Four senior American officials who have been briefed on the proposal discussed it on the condition that they not be identified because the plan is still under review. They all said that any direct aid to the Kurds would be one piece of a larger strategy to defeat the Islamic State in Syria.

One practical goal of the plan is to equip the Syrian Kurds after their spearheading of several fiercely fought battles against the Islamic State in the past several months, starting near Syria’s border with Iraq to, most recently, the strategically important city of Manbij, where the terrorist group had established processing centers for hundreds of newly arrived recruits. The city was also a final way-stop for more seasoned fighters heading back to Europe through Turkey.

The Kurds have also recently lost one regular source of arms — the Syrian government — as a result of the political rapprochement between Turkey and Russia, and clashes between Kurds and Syrian Army troops.

Politically, the aid would also seek to assuage the hard feelings the Syrian Kurds have felt toward their American allies since the Turkish offensive into Syria, American officials said.

Turkish news outlets reported this month that Mr. Erdogan had suggested that his country was prepared to conduct a joint operation with the United States to defeat the Islamic State in Raqqa. American officials, however, have played down that discussion, and have said the United States is still trying to figure how to assemble enough ground forces to take back Raqqa.

Across the border in Iraq, security forces will be ready to push into Mosul in October, the top American general said Monday.

Gen. Joseph F. Dunford Jr., the chairman of the Joint Chiefs of Staff, told reporters traveling with him aboard a United States military aircraft that the final decision on when to retake Mosul rests with Prime Minister Haider al-Abadi of Iraq, according to Reuters. The general added that “our job is to actually help the Iraqis generate the forces and the support necessary for operations in Mosul, and we’ll be ready for that in October.”