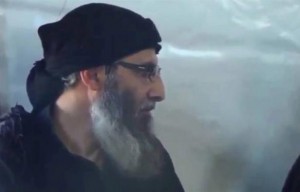 An Islamist coalition in southern Syria spearheaded by Al-Nusra Front has issued an ultimatum for the Yarmouk Martyrs Brigade to surrender after assassinating the ISIS-affiliate’s leader.

The Army of Conquest-Southern Region issued a statement Sunday that it was giving members of the Yarmouk Martyrs Brigade a 24 hour deadline to “hand themselves and their weapons over and undergo a sharia course.”

The statement, which was marked 5:30 p.m. at the bottom, said the deadline had been given to “end bloodshed and [turn] this shameful page on that deviant clique’s pledge of allegiance to [ISIS].”

The dramatic ultimatum came after Nusra announced Sunday afternoon that it had assassinated Yarmouk Martyrs Brigade chief Abu Ali al-Baridi, aka the “Uncle,” and other top leaders of the militant group.

“God has blessed his servants the mujahedeen with the death of the chief kharijites rogues [in Daraa province], the leaders of the Yarmouk Martyrs Brigade,” the Army of Conquest-Southern Region said in a statement released later in the day via its Twitter account.

According to the statement, the Yarmouk Martyrs Brigade leaders were killed in “a special operation made possible by God.”

The SOHR, for its part, reported that Baridi—who declared allegiance to ISIS in 2014—and two of his lieutenants had been killed by a targeted bombing in the town of Jumleh near the Israeli-Syrian demarcation line in the Golan.

“Two Al-Nusra Front members blew themselves up near the convoy of Yarmouk Martyrs Brigade leader Abu Ali al-Baridi, who was accompanied by several of his top commanders,” Amer al-Hourani told the outlet.

“Baridi and those with him were on their way to a meeting in western Daraa’s Jumlah area, where Abu Ali’s headquarters is located.”

Nusra Front fighters and supporters in southern Syria celebrated the operation, which comes after weeks of back and forth clashes between the Al-Qaeda and ISIS affiliates in southwestern Syria.

The two sides have engaged in on-and-off fighting since late 2014 western Daraa’s Sahm al-Jolan and Hait, as well as the areas surrounding the two villages.

“The sound of gunfire can still be heard in the western Daraa province village of Sahm al-Jolan which is under the control of Al-Nusra Front,” the SOHR reported on Sunday.

Activists told the monitoring NGO that the sounds were “the result of ‘celebratory’ gunfire by Al-Nusra Front members, after they killed Baridi.”

SOHR director Rami Abdel Rahman told AFP that “with this assassination, Al-Nusra has asserted its control on the southwestern front of Daraa province, near the border with the [Israeli-occupied] Golan.”

The Free Syrian Army-affiliated Southern Front is the largest rebel grouping in Syria’s Daraa region, where it maintains uneasy ties with Nusra.

On April 13, the Southern Front officially cut off ties with Nusra and in early August it said that the Al-Qaeda-linked group was not participating alongside it in its Quneitra offensive.

Despite these media statements, Nusra had reportedly assisted FSA rebels defend against a failed regime offensive in the Daraa province town of Busr al-Harir in late April.

Also, the Southern Front in its failed summer assault on Daraa had coordinated closely with Islamist groups active in southern Syria, despite the FSA-affiliated rebels’ disavowal of the Al-Nusra Front’s recent move to create an “Army of Conquest” in southern Syria.

Despite frictions, both the Southern Front and Nusra have been at odds with the Yarmouk Martyrs Brigades, which in turn has apparently been behind a wave of mysterious assassinations that have targeted rebel commanders in Daraa.