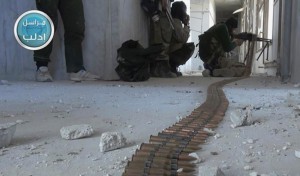 Members of the al Qaeda-linked Nusra Front have killed 20 Druze villagers in northwestern Syria, a group monitoring the war reported.

The mass killing occurred on Wednesday in the village of Qalb Loze in Idlib province, where the Nusra Front is part of an insurgent alliance that has seized wide areas from government control in the last three months.

The Druze faith is an offshoot of Islam viewed as heretical by the puritanical school of Sunni Islam espoused by al Qaeda.

The incident spiralled out of a confrontation that began when a Nusra Front member tried to confiscate the house of a villager who was fighting with Syrian government forces, the Syrian Observatory for Human Rights reported, citing local sources.

The dead included elderly people and at least one child, the Observatory said. A member of the Nusra Front was also killed when villagers managed to seize a weapon from a Nusra Front fighter.