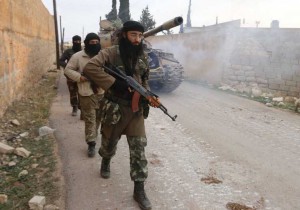 The al Qaida-linked Nusra Front has abducted the leader of a US-backed rebel group in north Syria, opposition sources and a monitoring group said, in a blow to Washington’s efforts to train and equip fighters to combat Islamic State.

A statement issued in the name of the group, “Division 30”, accused the Nusra Front of abducting Nadim al-Hassan and a number of his companions in a rural area north of Aleppo. It urged Nusra to release them.

A Syrian activist and a second opposition source said most of the 54 fighters who have so far completed a US-led train and equip programmed in neighboring Turkey were from Division 30.

The Syrian Observatory for Human Rights, a UK-based group that reports on the war, said the men were abducted while returning from a meeting in Azaz, north of Aleppo, to coordinate efforts with other factions. The opposition source said they were abducted on Tuesday night.

The train and equip program aims to bolster Syrian insurgents deemed politically moderate enough by the United States to fight the Islamic State group that has seized wide areas of Syria.

The Nusra Front, which Washington has designated a terrorist organization, has a track record of crushing US-backed rebels in Syria. Last year, it routed the Syria Revolutionaries Front led by Jamal Maarouf, viewed as one of the most powerful insurgent leaders until his defeat.

It was also instrumental in the demise of the US-backed Hazzm Movement, which collapsed earlier this year after clashing with the Nusra Front in the northwest.

The US military launched the program in May to train up to 5,400 fighters a year in what was seen as a test of President Barack Obama’s strategy of getting local partners to combat Islamic State.

But many candidates were declared ineligible and others dropped out. US Defense Secretary Ash Carter said it has fallen far behind plans.

Washington and Ankara this week announced their intention to provide air cover for Syrian rebels and jointly sweep Islamic State fighters from a strip of land along the border, with US warplanes using bases in Turkey for strikes.

But the United States and Turkey have not yet agreed which Syrian rebels they will support in the effort.