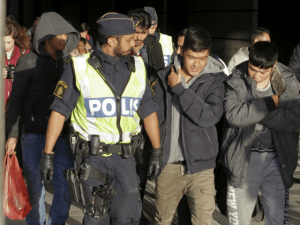 The number of war criminals being discovered among asylum seekers in Sweden is rapidly increasing with the Swedish Migration Board claiming cases have doubled in the last two years, like reported by breitbart.com.

Sweden convicted four war criminals in 2017, with one 48-year-old war criminal being found guilty of killing seven people in Syria. Investigations can be expensive to carry out and take years as they require the cooperation of foreign governments.

Patricia Rakic Arle, head of the war crimes commission, said: “A third of cases are related to incidents in Syria or Iraq, and besides those, there are scattered cases from other countries where there have been or are still conflicts.”

“We carry out many trips to interview plaintiffs. In an inquiry into a person’s involvement in the genocide of Rwanda, six, seven-day journeys are normally required. So far, the group has had three such investigations,” she added.

In September of last year, the first member of the regime of Syrian President Bashar Assad to be convicted of war crimes was found guilty in Sweden. Mohammad Abdullah, who fled to Sweden as an asylum seeker, was sentenced to eight months in prison after he posted a photo of himself posing with his foot on a corpse.

Swedish prosecutor Henrik Attorps initially tried to have Abdullah brought up on murder charges but was unable to prove he had killed the individual he had posed with in the photograph.

“There is an international duty to act on these crimes,” Attorps said, and added: “Sweden should not be a safe haven for war criminals.”