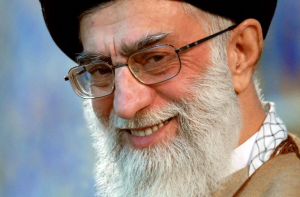 By his remarks Wednesday on forbidding more Iran-US talks, at the same time that Iranian moderate officials were talking about the next steps after the nuclear deal, Khamenei made clear that no more steps would be on the horizon.

Signing the nuclear deal was the finish line of the negotiations’ marathon and if moderates insist on the next steps and more talks with US -which has “many disadvantages and no advantages” according to Khamenei- the deal itself may be go under question.

“However the Iranian negotiators were vigilant in the nuclear talks but Americans could anyway take a moment on some occasions to carry out their plots against Iran’s national interests,” Khamenei said.

The Supreme Leader’s remarks can be considered to be the most serious criticism of the nuclear deal. This is while some conservative politicians in Iran previously claimed on numerous occasions that Khamenei was against the agreement.

It is a fact that Khamenei has never expressed positive words about the nuclear talks. He even once forecasted, “the talks will not lead anywhere.”

On various occasions he has announced that the Iran-US disputes are beyond the nuclear case. Just days before reaching the nuclear agreement the Islamic Republic’s supreme leader, argued that the struggle against the US will continue even if nuclear deal is signed.

For those who follow Iran’s political developments, Khamenei’s recent emphasis on no more Iran-US talk is no surprise. It was a surprise when he agreed to start direct talks with the “Great Satan” breaking a long-held, hard-shell taboo.

Of course the recent developments in the region including Russia’s deployment in Syria and the West’s passive stance have encouraged Tehran to insist on its regional policy. Now the Islamic Republic clearly threatens its regional rival-Saudi Arabia with military intervention.

The Islamic Republic now has the upper hand not only in Yemen but also in Iraq, Syria, and Lebanon and has no reason to withdraw its regional influence. According to some Iranian politicians, Sanaa is now the fourth Arab capital in Iranian hands – after Beirut (through Hezbollah), Damascus (through President Bashar al-Assad) and Baghdad (through Iraq ’s democratically elected Shia-led government).

Returning to Khamenei’s recent remarks, they should be understood as a three dimensional message: to domestic hardliners- saying no change in principle policies following the nuclear deal, to regional allies- ensuring them about no deals on regional issues, and to moderates at home- reminding them of no further steps towards normalizing ties with the US.

It seems the nuclear deal was the first and last privilege that Khamenei granted to Iranian moderates headed by President Hassan Rouhani, at least for the present time.

So, the “flexibility” period in Iran’s diplomacy that started months ago with Khamenei’s words at the beginning of the nuclear talks is over. His latest remarks closed the Islamic Republic doors to further cooperation.

But who knows, maybe sooner or later other political and economic conditions will force Iran to start another diplomatic “heroic flexibility”. Twenty-four hours is a long time when we are talking about politics.