You are here: Home / Senza categoria / Nuclear reactors are at risk of Islamic terrorist attacks 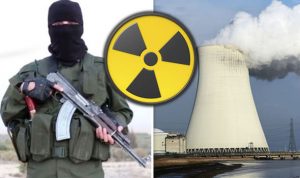 Chernobyl’s 30th anniversary on April 26 comes against the backdrop of growing apprehension that nuclear reactors may become a terrorist target.
Serious concern arose during the recent Islamic State attacks in Brussels. Evidence suggested that the assailants were considering a nuclear-related incident, like reported by standardmedia.co.ke.

The terrorists had a senior Belgian nuclear official under surveillance, and two former nuclear power-plant employees were reported to have joined Islamic State.
This may help explain why Belgian authorities rushed military forces to protect its nuclear plants. The scare provided a reminder that nuclear reactors are radiological mines that terrorists could exploit.

Destruction of a plant would mark a zenith of terrorist violence. Radioactive elements would spread across national boundaries. It would endanger the lives of many, while creating economic and environmental havoc mimicking the Chernobyl or Fukushima explosions.
How concerned should the West and other regions be? And if the peril remains so serious, why doesn’t the international community impose mandatory security standards?

Actually, Washington has tried to do just that. On June 14, 1946, the US proposed the Baruch Plan at the United Nations. It called for an International Atomic Development Authority that would maintain “managerial or ownership of all atomic energy activities potentially dangerous to world security” and “the power to control, inspect and license all other atomic activities.”

Had Cold War politics not intervened, reactors would likely be safer and more secure today. Instead, the international community now faces a patchwork of national regulations. The result leaves open a terrorist nuclear Pandora’s Box.

Certainly, enforcement of robust security standards — including adequately manned, trained and armed guard forces; physical barriers to vital areas; detection, alarm and communication systems; a careful vetting of all plant employees to ensure against infiltration of terrorists and criminals, along with other measures — are but a small price to pay to avoid yet another intentional or accidental Chernobyl or Fukushima.Unfortunately, given inertia, we may have to wait for the intentional Chernobyl to take place to get action.

Consider that nuclear critics have been concerned for decades that reactors are likely terrorist targets and not enough is being done to protect them.They insisted that terrorists could breach the containment structures of nuclear power plants using sophisticated hand-held weapons, rocket-propelled grenades, vehicular bombs and water-based or airborne attack. They also warned about insider sabotage of vital plant life lines, which could release the core’s deadly radioactive contents.But with no serious attack so far, complacency has set in.

Belgium finally put armed guards at its plants only after last year’s Paris terrorist attacks.  How many other nations among the 30 with power reactors have been equally complacent?But smugness has been revealed to be an embarrassment. In 2012, Greenpeace activists broke into a Swedish nuclear installation. The environmental activists scaled fences surrounding two nuclear power reactors and hid four of its party overnight on the roof of one. In 2014, another group of Greenpeace activists broke into a French nuclear power plant and hung a large banner from the reactor building.

These stunts demonstrate there is something seriously wrong with power-plant security practices in the two countries, and in perhaps many others.The International Atomic Energy Agency, the World Association of Nuclear Operators and the European Union — all press for reactor security and safety by offering guidelines. They send survey teams to evaluate plant security at the request of the host country. But they cannot force countries to change their security habits.Generally, such mindsets don’t change easily.

It takes events, not hypotheticals, to do that.It took the 1993 truck bombing of the World Trade Center in New York, for example, to push the US into setting tougher standards for protecting reactors against vehicular bombings.But even in the US, which purports to apply the security gold standard, mock attacks have repeatedly found holes in reactor security.We should expect that only an intentional Chernobyl incident will get complacent countries to dramatically change their security culture.