You are here: Home / MidEastGulf / Nuclear agreements and business deals with Iran, but what happens post-honeymoon period? 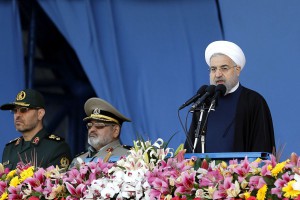 A fresh wave of energy has boosted Iranian foreign policy since Tehran has been freed of all economic sanctions as a result of its nuclear deal with the P5+1 group of world powers. The doors of Europe are now open to President Hassan Rouhani; he hasn’t hesitated to take advantage of this with his current European tour.

Rouhani was greeted warmly in France and Italy; business deals worth €17 billion were signed in Rome and his hosts even covered up nude statues that were in his line of sight, in case they would offend the Iranian leader. Pope Francis has referred to the deals as “a definitive step towards a more secure and fraternal world” and French officials, who had a significantly harsher approach in the EU3+3 negotiations, have now softened and are more open. “Trust needs to be built,” said an unnamed senior French diplomat shortly before Rouhani’s visit. “It’s like love. It is only the proof of love that counts.”

Plans were made for French President Francois Hollande and Rouhani to have lunch at a high end restaurant in Paris on Thursday afternoon, but they were cancelled after the visitor requested a halal and alcohol-free meal; the French officials refused, as it would have gone against their famously upheld secular Republican values. Rouhani was also met with a flood of protestors when he arrived in Paris, many of whom were of Iranian descent, after a worldwide campaign — #No2Rouhani — was launched, showing that the debate about whether Rouhani really is the “partner of stability” is live in most parts of Europe.

Under the watchful eyes of the international community, the EU3+3 discussion with Iran was a daunting process. Hawkish sentiments within each participating country’s domestic politics meant that the agreement was under a lot of scrutiny, and the balance between diplomacy and national security seemed almost non-existent at some points. Throughout the negotiations, Barack Obama was accused of only looking out for his legacy rather than his country’s security. The other criticism was that by only focusing on Iran’s nuclear capabilities, it will be harder to assess more immediate concerns that may lie under other aspects of Iran’s foreign and defence policies.

Since the establishment of the Islamic Republic in 1979, the essence of pan-Islamism, which is a core value of Ayatollah Khomeini’s doctrine, has been the basis of Iranian expansionism in the Middle East and North Africa (MENA). The means by which Iran is doing this is by arming and supporting non-state political and military actors in the region, irrespective of sect. Generally, though, Shia groups have more of an ideological than tactical reason to accept Iranian support in return for their loyalty. In many ways, this has fed the current instability across the MENA region.

One only needs to look to Syria for the most obvious example of this strategy playing out. Being one of the most vital of countries as far as Iran is concerned, Tehran has a vested interest in ensuring that its ally Bashar Al-Assad does not lose power. Thus Iran supports Assad diplomatically, financially and militarily, both directly and via proxies; elements of the Republican Guards Corps are deployed in Syria, for example. Tehran is showing no signs of giving up its support for Assad, and is unlikely to do so in the near future, unless there is a replacement who can guarantee that Iran’s interests are secured.

In the context of the Iranian nuclear deal, Supreme Leader Ayatollah Khamenei said that if any country imposes sanctions on Iran for funding terrorism, or for human rights abuses, the deal will be considered null and void. This has backed the world powers who want to sustain the deal into a corner; they must not only be cautious in the way that they address the defence policy of the Islamic Republic but also

refrain from speaking openly about Iran funding and supporting Hezbollah and pro-Syrian Army militants in the context of “funding terrorism”.

Iranian rhetoric changes when it changes president. Before the much-reviled Mahmoud Ahmadinejad the post-holder was Mohammad Khatami who, like Rouhani, believed in diplomacy and aimed to take Iran out of the isolationism that his predecessor had imposed on Iran. Iran’s presidential speeches and actions have an impact on the international community, but the West needs to keep in mind that Rouhani has not revolutionised Iranian policy in any way, nor has he made the international community a more “fraternal world”. Curbing Iran’s nuclear ambitions does not mean that its military capabilities are less able to flirt with the power dynamics of the region. The doors have been opened for diplomacy and economic cooperation on the grounds of clipping Iran’s wings in only one aspect of its potential; this means that the international community must prepare for the consequences of the growth of Iran’s nonconventional and increasingly overt military capabilities. There may be nuclear agreements and business deals with Iran now, but what’s going to happen when the honeymoon period comes to an end?