You are here: Home / Senza categoria / Now Islamic State says it can shoot down aircraft 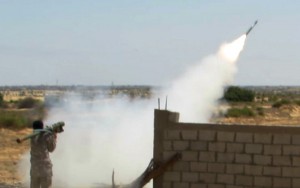 That ISIS could potentially shoot down aircraft near the Israeli border, where the Israelis frequently launch strikes, was especially worrying, experts said.

“It’s one of those things that could turn ugly very quickly. The danger with ISIS is that they would love to provoke an Israeli reaction. It would put Egypt in a bind and further raise their status in the Middle East,” Daveed Gartenstein-Ross, a senior fellow at the Washington, D.C.-based Foundation for Defense of Democracies.

The U.S.-led effort has depended its air superiority over ISIS, which the Pentagon claims has destroyed more than 7,600 ISIS targets. Fighters often flee at the sight of coalition aircraft and U.S. officials have said they believe their airstrikes have led ISIS to stop moving in large formation, limiting their ability to launch major attacks. The few major wins over ISIS in Iraq and Syria have all come with a heavy backing on American air power.

ISIS released photos of the missile as part of a series of grotesque photos showing dead Egyptian soldiers the group said it killed over the weekend. The photo of the missile is blurry but could be a second-generation Man-Portable Air-Defense System (MANPAD) Battery Coolant Unit (BCU), Matt Schroeder, senior researcher at Geneva-based Small Arms Survey.

The weapon’s lethality, “really depends on how skilled ISIS is, the tactics, the number of functional systems they have and how the Egyptian respond,” Schroeder said.  For example, will the Egyptian military retreat knowing ISIS has the missiles?

Earlier this month, fighting erupted between Egyptian Army and ISIS fighters in northern Sinai, parts of which have become a stronghold for jihadists. Last week, after at least 17 of its troops died in the Sinai, the Egyptian army posted photos of ISIS fighters it purportedly killed on its Facebook page.

Over the weekend, ISIS responded by showing equally graphic photos of dead soldiers from the Egyptian Army at the hands of ISIS, turning the battle for the Sinai into digital warfare as well.

In the midst of a tit-for-tat media campaign, ISIS showcased its use of surface-to-air missiles, or SAMs.

Such weapons likely traveled by way of neighboring Libya, which has become a weapons route since 2012 when jihadist groups took control of large swaths of the country. But the weapons themselves could be from anywhere, as they are “widely proliferated,” Schroeder said.

“We don’t know what kind of shape the SAMs are in. It clearly is intended to be seen brandishing a weapon that could do quite a bit of damage,” Gartenstein-Ross said.

News of ISIS’s latest weapon in the Sinai came as President Obama made a rare visit to the Pentagon to assess the U.S. approach toward ISIS. The president emerged from the hour-long meeting to a briefing with reporters, where he suggested the strategy despite several “setbacks” was working.

News on the ground, however, was decidedly less upbeat. ISIS in the last week announced its expansion into the North Caucasus. With that, it has stretched its reach halfway across the globe, from Nigeria to Afghanistan to Russia — all since the U.S.-led campaign began last year.

“This will not be quick,” the president warned about the military campaign, adding the fight for hearts and minds would be a “generational struggle.”

And he rejected calls for more U.S. troops in Iraq, where roughly 3,280 are either securing U.S. personnel or advising their Iraqi counterparts. U.S. troops alone could not eliminate the ISIS threat, Obama said.

“Because if we try to do everything ourselves all across the Middle East, all across North Africa, we’ll be playing Whack-a-Mole and there will be a whole lot of unintended consequences that ultimately make us less secure,” the president said.

As the president spoke, ISIS reportedly regain area north of its Syrian capital of Raqqa after the U.S.-led coalition launched aggressive airstrikes over the weekend, punctuating the fragility of the U.S. effort.