DOZENS of would-be jihadis are using the Mediterranean holiday destination of Cyprus to try to sneak into Syria, it has been revealed. 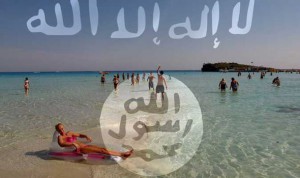 Officials said dozens of foreign nationals had attempted to use the island as a stopping off point between northern Europe and Islamic State strongholds in the Middle East.

Among the 18 foreigners stopped from travelling to Syria over the last two years were eight Britons, seven French, two Swedes and a woman from the Netherlands.

But a further eight Britons, five Australians and two Finns successfully made the journey – with the presumption being made that many of those were heading to join ISIS.

British Foreign Secretary Philip Hammond said last July that the UK was “keen to work” with Cyprus to counter the threat posed by “foreign fighters going to Syria, Iraq and elsewhere”.

But fears are now growing that the idyllic tourist hotspot has replaced the Turkish mainland as the jihadis favoured route to warzones including the depraved group’s de facto capital, Raqqa.

The Cypriot official, who spoke on condition of anonymity, said that all 33 cases have arisen since early 2014 and that the “vast majority” of those people were “European citizens of Islamic origin”.

Cyprus’ eastern-most coast is less than 100 miles from Syria where ISIS – also known by its Arabic acronym Daesh – is fighting other rebel groups and President Bashar Assad’s forces.

The island has been divided since 1974 when Turkey invaded in the wake of a coup by supporters seeking a union with Greece.

Seven checkpoints permitting people to cross between the internationally recognised south to the breakaway north have been in operation since 2003.

Cyprus has stepped up security at the checkpoints amid concerns that Europeans could travel to the European Union member country, cross northwards and then head to Syria from there via Turkey – the only country with direct air and sea links to the Turkish Cypriot north.

Britain is launching airstrikes against ISIS targets in Syria and Iraq from an air base it has retained on Cyprus since the island gained independence from British colonial rule in 1960.

RAF Akrotiri is home to 2,230 army, navy and RAF personnel and is the main launch pad for air operations over the Middle East.