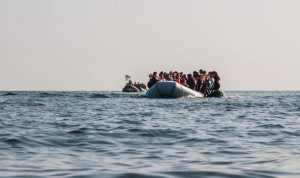 Criminal gangs have made human trafficking a money-spinning industry fuelled by a “seismic” development in the trade in Europe, Europol’s director Rob Wainwright said.

Europol arrived at the figures through debriefings with 1,500 asylum-seekers, refugees and economic migrants showing that 90pc had paid a criminal gang to reach Europe.

Mr Wainwright said: “We also know that, on average, each migrant is paying between 3,000 and 6,000 dollars to a criminal facilitator for their journey.

“So you do the simple math and you’re up to a turnover in 2015 of between three and six billion dollars. They are big figures. It’s running in to billions of dollars made by criminal networks in one year alone in Europe.”

Desperate migrants, fleeing in fear and from reported abuse in their homelands, are prepared to pay different gangs of traffickers as different stages to Europe.

To add to their misery some of them are also stripped of their life savings, given seats on boats that are deliberately scuttled or they may face kidnapping or extortion.

The scale of the crisis means that smugglers, many of whom may also be involved in the drug trade, have found a new lucrative supply of victims and governments and law enforcement need to toughen up, according to Mr Wainwright.

He added: “We’re going to have to up our game in terms of dismantling this criminal infrastructure in a more successful way than we have done in the past.”