You are here: Home / FakeNews / November surprise: an anti-Semitic anniversary 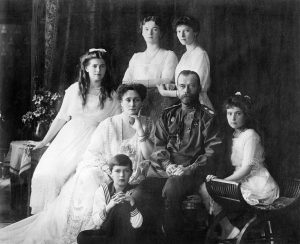 Last month’s centenary of the 1917 Russian revolution passed without significant commemoration from the side of the Russian authorities, and neither a positive nor negative official interpretation was pursued, like reported by euvsdisinfo.eu.

The only state-affiliated outlet that was allowed to elaborate on the anniversary was the Kremlin’s international mouthpiece, RT (Russia Today): RT’s 1917 multiplatform project targeted foreigners with a depoliticised message and a design in keeping with the kind of Soviet poster propaganda style that traditionally enjoys popularity among tourists visiting Russia. The potential of political messaging in RT’s project was sterile to the degree that Stalin had his own Twitter profile where he was jovially called “Joe Stalin”.

However, just shortly after the actual anniversary date had passed, a November surprise was prepared for Russian audiences.The Russian Orthodox Church requested that federal investigators reopen the murder case concerning the killing of Russia’s last Tsar, Nicholas II, and his family (see photo above) in 1918. The church specifically asked investigators to answer questions as to whether the killing had been “a ritual murder”.

As independent Meduza explains in its English edition, the term “ritual” in this context has a specific history, and can only mean one thing: leaders in the Russian Orthodox Church are open to a theory that sees a secret Jewish, cabalistic ritual in the killing, which includes elements of human sacrifice.

Concerns about these latest developments have been raised in many Russian independent media, with Novaya Gazeta covering the topic extensively in a number of articles, one of them penned by Alexander Soldatov with the title “’The Protocols of the Elders of Zion’, now as evidence in a criminal case”. Soldatov describes the close ties between the Church and the Kremlin and concludes that “when the Church demands an investigation into whether the killing of the Tsar and his family on 17 July 1918 was ‘a ritual,’ then it is nothing but a translation of the official propaganda into the language of the church: external and internal enemies, which create trouble in Russia, must be found”, Soldatov says, and continues: “From the point of view of the official chauvinistic ideology, which is disseminated in Russia via brain-washing television, our history is solely a matter of pride, representing an unbroken line of great victories; and if there are dark pages in this history, then there are dubious foreigners behind them. This is the usual paranoia-based conspiracy theory. They cannot see the Russian people in the atrocities of the Revolution, only external enemies, a fifth column formed in Russia with ‘Western money’; and the Tsar was not killed by Russian revolutionaries, but by evil Talmudist enemies who sacrificed him to the devil.”

When the pro-Kremlin disinformation campaign turns to writing its own version of the past, it is usually an indirect way of promoting a specific narrative about the present. Last week, for example, we saw the history of the Prague Spring in 1968 used as an indirect way of speaking about Ukraine’s 2014 Maidan Revolution. Similarly, disinformation about an alleged “Jewish ritual murder” almost 100 years ago can serve to solidify and reiterate a narrative about modern conspiracies that allegedly target Russia and its interests.

At the centre of this narrative stands the notion of anti-Russian conspiracies whose keyword in modern Kremlin disinformation has become “Russophobia”; this term is traditionally used by Russian government outlets as a universal explanation when Russia’s policies and actions meet objections and concerns from the side of the international community. The idea of Russophobia is pushed  in the context of the anniversary by instilling the view that it is not just a modern problem, but that Russia has always been the target of hostile external forces.

It is not the first time anti-Semitism and other forms of racism and hatred towards minorities have become paramount in the pro-Kremlin disinformation campaign. We have earlier described attacks Russia’s Jewish communities, anti-Semitic conspiracy theories and the use of sexist, racist and homophobic hate speech live on air. REN TV, a pro-Kremlin nationwide TV channel, has devoted a whole programme to alleging that LGTB people are “sick and perverse”.