You are here: Home / Africa / Northern Mali reels under renewed conflict due to Islamist 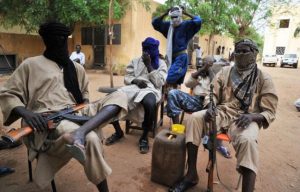 War has returned to northern Mali. The desert area is arguably more unstable now than at any time since the French intervention against al-Qaeda in the Islamic Maghreb (AQIM) in 2013 and the deployment of UN peacekeepers later that year, like reported by bbc.com.

The 2015 peace agreement failed to settle turf wars. Islamist militant activity has spread to the centre of country. Now a regional counter-terror force, the G5 Sahel, is being put in place.

But many Malians say that looking at Mali’s problems through a gun sight may be making the country more dangerous.

“Every young man wants a gun. Young men are prepared to steal, to kill to acquire a firearm,” says Sidy Cissé, the youth councillor for Gao city.

“They want a firearm so they can claim the right to join the UN-backed demobilisation programme and be given a job.

“Of course if an armed group offers these same men $500 (£389) or $800 to lay a landmine in front of a UN convoy they will do so. They are not acting out of conviction but for money,” says Cissé.

Gao, a low-rise city on the Niger river, has a long history of lawlessness. The richest people like it that way. They are the residents of the Cocaine City neighbourhood who sleep comfortably in luxury villas built from the proceeds of hostage ransoms and desert trafficking in drugs, fuel and consumer goods.

The flow of Mediterranean-bound migrants through Gao is another vital income stream here on the edge of the Sahara. It provides jobs for drivers, runners, innkeepers, petrol-pump attendants and snack-sellers.

Diplomats and senior UN civilian staff have started taking stock of four years of intense international focus on Mali. “The peace deal is just a fig leaf behind which people are hiding who actually do not want peace. They want instability so they can continue their shady business,” said a diplomat in Bamako.

A senior civilian UN official said: “We need a certain amount of security here, to protect people seeking a political solution. But I do not think we need thousands of under-trained blue-helmeted soldiers who by being here offer the terrorists a target.”

Since Minusma was created in July 2013, it has acquired the moniker of the most dangerous UN mission in the world.

In the past week, nine people – most of them civilian security guards – died in attacks on Minusma bases in Timbuktu and Douentza. Mali’s own army is an even greater target for attack and three years of EU-funded training do not appear to have made it more robust.

Minusma’s Bangladeshi blue helmets patrol the area around Gao in 30-year-old Soviet-built armoured personnel carriers. They are robust vehicles but they were not built for the desert. “The weather is the biggest challenge of all,” says Major Mohamed Rafiq Islam.

Then there is the “asymmetric” threat – military speak for it could from anywhere, in any form. “The threat is all over,” he says. “It could be IEDs (explosives), fire, we do not know. Our mission is to protect civilians and the MOC (mixed patrols of the Malian army and groups that signed the 2015 peace deal).”

As the BangBat convoy of white vehicles moves around the outskirts of the city, a sand-coloured pick-up sporting a welded-on machine gun seems to drive a lap around us, as if to show off. The pale blue flag of Gatia – a pro-government Tuareg militia – flutters from an aerial.

Gatia (Groupe d’Autodefense Touareg Imghad et Alliés), which is led by former Malian army officers-turned-warlords, has become the government’s answer to the Tuareg and Arab armed groups who want to create an independent country called Azawad in the north of Mali.

The independence dream may still be cherished by a few Tuareg intellectuals. But most Tuaregs have decided that to achieve independence by allying with highwaymen, drug-runners, migrant-traffickers and Islamists is too high a price to pay.

The Azawadian militias largely survive not on ideas but on a need to conquer and protect road junctions in the desert for the levying of tolls and the passage of goods and trafficked humans.

The 2015 peace agreement, brokered by Algeria, and the endless UN-sponsored talks that continue on a monthly basis over demobilisation minutia, are sneered at by people like youth leader Cissé. “The peace process has given legitimacy to people who do not want peace. They want chaos. It is better for business,” he says.

Chaos is also the best environment for Islamist groups, such as al-Qaeda, who within it can broker short-lived alliances of expediency, just as they did briefly with Azawadian independence fighters during the occupation of northern Mali in 2012.

Gao’s 150-bed hospital – which maintains care standards thanks to Red Cross funding – experiences the impact of the Malian crisis in ever-changing ways.

At the moment, war wounded are eating away at the capacities of the surgical wards. In a room adjacent to the militiaman’s ward, two civilian truckers are receiving treatment. They were driving a tanker for Minusma when it hit a landmine. Two other people on the vehicle were killed.

“We adapt to the situation,” says surgeon Touré. “Of course we would like to be concentrating on the broader health of the community, on nutrition issues and maternal health. But when the pick-ups start arriving after a gunfight we have to give them immediate attention.”

The injured militiaman groans in pain as he rolls over in his hospital bed to reveal his bandage. Miraculously, the bullet simply grazed the top of his spine.