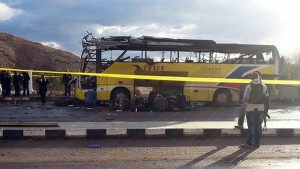 At least three people were killed and 14 others injured today after a roadside bomb targeted a bus in Egypt’s restive North Sinai.

The bomb was intended to target security personnel, Azazi said.

Prosecutor General Hisham Barakat, who has referred thousands of Islamists to trial in recent months, died from injuries sustained in the revenge attack by Islamist militants.