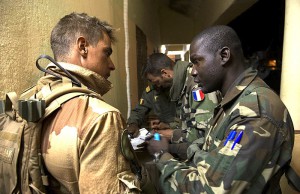 Nordic troops ought to learn French to better contribute to international peace missions in future, security experts and politicians have been told.

The advice was issued at a meeting in Elsinore, Denmark, on Monday (10 October) of a select group of security experts and members of the Nordic parliaments’ security committees.

“I think Mali has shown that if you want to do activities beyond sitting behind perimeter walls, talking to other UN colleagues, then it is very important to speak the local language,” Kristoffer Nilaus Tarp, an independent analyst who worked for Unicef, the World Bank and the Danish Institute for International Studies (DIIS), said.

Finland, Sweden, Denmark and Norway all contributed to the UN peace keeping mission in Mali, in place since 2013.

Tarp said that future conflicts are likely in several other countries in the Middle East, in the Sahel region, and in the Maghreb, where Arabic and French are the primary languages.

“It seems that military training has been beefed up on the Arabic language front, but not on French. In many military academies it is not even offered,” he told EUobserver.

“To build a positive relation to their local communities, speaking the local languages is a must”, he said.

He named the Central African Republic, Democratic Republic of Congo, Mali, Chad and Niger as countries that could potentially collapse.

“I think the argument of self-interest [for peace-keeping operations] is probably becoming a stronger one for European countries in future,” he said.

“We have a self-interest in success for the Mali project for example, as it could otherwise have a negative impact on the entire region. Libya is also such an example,” Tarp said.

“We have migrants arriving at our shores, most of the illegal arms and drugs sold in Europe find their way through fragile or collapsed nations”.

Their engagement peaked during the Balkan wars in the mid-1990s, but has fallen ever since.

“The operations in Afghanistan, Iraq and Syria have drawn on all of us collectively and pulled resources out of defence and lead to a shift away from large multinational led UN operations,” Tarp said.

There is no UN-owned army, but UN forces, composed of member states’ contributions, amount to the second largest in the world after the US.

Finland is the only Nordic country listed among the top-10 western contributors to UN missions.

Denmark contributes almost only to Nato missions and only little to UN ones, while Sweden and Norway have taken a more mixed approach. Finland contributes troops to the UN only, which is not seen as controversial by its Russian neighbour. Iceland, a Nato member, has no armed forces.

“Sweden pulls home for the defence of the Baltic sea,” noted Swedish conservative MP, Hans Wallmark, at the Elsinore event, adding that the Nordic co-operation in Mali was a special case.

“UN missions are lengthy, so I believe that Nordic countries could usefully rotate with each other,” said Danish social democrat MP and Nordic Council president, Henrik Dam Kristensen at the conference.

“But as long as we have terror, our main focus will remain on combating Isil and who-ever is coming after them,” he said.

Dam Kristensen, pointed to similarities between the current situation in the Baltic region and the days of the Cold War. He called for the Nordic and Baltic countries to work more closely together and display solidarity in the face of Russian provocation.

“We need to make it clear to Russia that provocation is completely unacceptable,” he said.

“Sweden and Finland joining Nato would be the best way to improve the security situation around the Baltic Sea,” suggested Ann-Sofie Dahl, an associate professor at the Centre for Strategic and International Relations (CSIS) in Denmark.

Dahl said the pipe should not be seen as a commercial project but rather as a strategic initiative by Russia to split the West.

“Of course there is a commercial aspect of it, since it is about selling gas, but it is also an instrument in a broader Russian ambition to weaken Europe and the West and make Europe dependent on Russian gas,” she told EUobserver in the margins of the security conference.

“Germany sees it differently, Italy is also on a different side on many issues, such as extending sanctions – and Russia tries to exploit it,” she said.

“May be it [Nord Stream II] can still be stopped and that it is something the Nordics should co-operate on,” she suggested.

Erkki Tuomioja, former Finnish foreign minister and now a member of the social democratic group on the Nordic Council, rejected Russia-bashing, however.

“I am not afraid of Russia, but rather of the bellicose rhetoric in the press that Russia could attack at any time,” he said.

“The Nordic countries should be proactively counteracting aggressive rhetoric, not further inflaming the situation”.