You are here: Home / MidEastGulf / No timeline for Raqqa operation 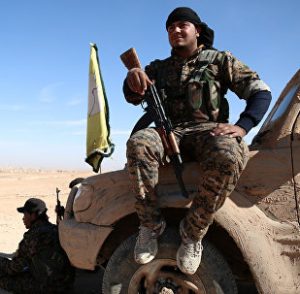 A spokesman for the US-led coalition says there is no timeline for the Raqqa operation, although the leader of the Kurdish People’s Protection Units (YPG) said the operation to take Raqqa city from ISIS would start in April, like reported by aranews.net.

“Well, I’m not going to get into the business of predicting timelines. We continue to make good progress with our partner forces in isolating the city. The enemy [ISIS], once their pinned down there, they’re not going to be able to go anywhere. And we’re going to continue to hammer them with strikes as our partners move in and retake the city,” Colonel John Dorrian, Operation Inherent Resolve Spokesman told reporters on Wednesday.

“It’s our intent to do the very best we can to get this done on our watch. None of that has changed. We’re doing this as quickly as we can.  One of the reasons for that is because the enemy — any area that they control, there’s tremendous human suffering there. So we’re going to continue our operations at pace,” he added.

“They continue to make progress in clearing ISIS fighters from the territory and the vicinity of Tabqa. Having cleared territory east and north of Raqqa, where they are now nearing positions to enable their assault to liberate the city,” said Colonel Dorrian. “As they’ve cleared, they’ve repelled a significant number of ISIS attacks as the enemy struggles to slow their advance.  In the last 24 hours, they’ve cleared 11 square kilometers east of Raqqa and toward Tabqa, where the enemy remains completely isolated.”

However, he said that ISIS is resisting in Tabqa through human shields and attacks.

“Our partnered forces have encountered tough resistance from ISIS in the area, encountering VBIED, direct and indirect fire attacks, as well as the use of human shields which the enemy continues to use to slow their advance,” he said.

The American Colonel added that there was no delay in air support for the Syrian Democratic Forces (SDF).

“Well, in the last week from the 4th to the 11th, we’ve conducted 123 strikes for the operations toward isolating and ultimately liberating Raqqa.  So that’s a significant number of strikes.  You know, we have made adjustments to our operations to account for the, you know, the potential tensions that resulted from the strikes that were conducted because of the Syrian regime’s chemical attacks,” he said.

Moreover, he said the coalition has brought additional fire support to the SDF. “the coalition has brought additional fire power into Syria in order to support the Syrian Democratic Forces and the Syrian Arab Coalition in their advance. That’s comes in the form of marine artillery and also Apache gunships, which have been instrumental in supporting their advance in areas like Tabqa. And in and around the areas that surround Raqqa,” he said.

Meanwhile, the US-led coalition’s spokesperson said he had no update about a Pentagon request to the Congress to provide small arms and heavy arms to the Kurdish-led Syrian Democratic Forces, that have requested more support to fight against ISIS in Raqqa.

“What I can say is right now our efforts have been directed toward providing resources, equipment, and light weapons to the Syrian Arab Coalition. That is the current state of play. As far as any new developments on that, that’s a discussion probably for another day.  And if there’s anything new on that I think it’d probably be announced from OSD public affairs,” he added.

“We’re obviously engaged in very, very difficult fighting in both Mosul and around the Raqqa area, which is where we expected to be at this time. You know, with respect to what’s going in Raqqa, I think we have the capabilities we need to do what we’re doing right now, which is the isolation of Raqqa. And I — I think you’re — I think we’re seeing that play out every day,” General Joseph L. Votel, commander of the U.S. Central Command told reporters last Tuesday in a press conference with U.S. Secretary of Defense Jim Mattis.

“Right now, as our partners on the ground very effectively isolate this particular area as we move forward, obviously, the secretary and I and others are in consultation here on what additional resources we need,” he added.