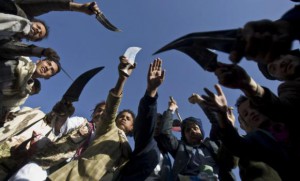 The foreign minister said during a conference in London:

“These calls are unacceptable after all of the destruction Ali Abdullah Saleh has caused. There can be no place for Saleh in any future political talks.”

Earlier, fighters, loyal to former president Saleh, asked all Yemenis to have a political dialogue and find a working solution to end the bloody conflict in the war-torn country.

Saleh was the president of Yemen between 1990 and 2012, when he stepped down and ceded power to his deputy Abd Rabbuh Mansur Hadi, who then became the new president of the country.In January, Houthi opposition forces seized the capital Sanaa and forced Hadi to step down. The ex-president asked the Arab League for military support.

On March 19, the Saudi-led coalition of Arab nations started airstrikes against the Houthi positions in Yemen. The United Nations estimates that more than 1,000 people have lost their lives in Yemen since the start of the military campaign.