You are here: Home / Analysis / No one is winning the Syrian civil war 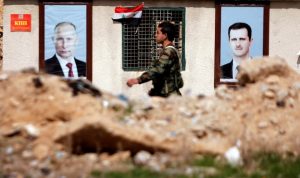 Seven years ago, when Syrian protesters called for “a day of rage” against Bashar al-Assad, there were few signs that they would have an impact. Three years later, as the protests transformed into a civil war, one that would eventually draw in the region’s powers, it seemed a matter of when, not if, Assad would go the way of his fellow strongmen in Tunisia and Egypt. But in March 2018 on Wednesday, which by some accounts marks the seventh anniversary of the start of the conflict, Assad appears no closer to leaving office than he was seven years ago, like reported by theatlantic.com.

Assad’s has kept his position, at great cost to Syria. But it would be wrong to say he is in control. It’s true that he, with the support of Russia and Iran, has held onto Syria’s major cities, including Damascus and Aleppo, as well as much of the West of the country. (Russia’s military intervention in the conflict in late 2015  gave Assad a decisive edge.) Most of the Syrian population that didn’t flee the country now lives in areas controlled by the government. But Syria as a whole has effectively collapsed. Before the civil war, the country was, by Arab standards, solidly middle income. It is estimated that it will take another two decades after the fighting ends, whenever that happens, for Syria to regain its pre-war economic status. The price tag to rebuild the country is estimated at $200 billion or more if the conflict endures—money neither Assad, nor his patrons in Moscow or Tehran, have to spare.

Then there is the human cost: More than 500,000 people killed, 5 million refugees, entire cities flattened. There are few signs the fighting is close to stopping—despite a 30-day, UN-mandated ceasefire that went into effect last month. Assad continues to bomb Eastern Ghouta, the region outside Damascus held by rebels including anti-Assad Islamists . The death toll there since the most recent assault began last month exceeds 1,000. With the international community doing nothing to stop him, it is all but certain Assad will sooner or later capture the area. When he does that, he will have defeated one of the last major pockets of resistance. But even then, it will be hard to say that he “won” the war.

“It’s very difficult for us, as Syrians, who have watched this from the beginning of the revolution. For us it feels like … there’s nothing really being done to help the people have been suffering for over seven years,” said Lina Attar, a Syrian American architect from Aleppo who is the co-founder of the Karam Foundation, an aid organization that works with displaced Syrians. “And so when you hear the words ‘Assad has won,’ they are very difficult words to hear. As a Syrian you think, ‘Won over what?’”

It’s unclear—and highly unlikely—that Assad can survive in power without Russian, Iranian, and Hezbollah support. He says he wants to regain control of all of Syria, but may have to settle for only a bit more than he has now. The Kurds, for example, are unlikely to give up the autonomous territory they’ve gained in the northeast of the country. And though ISIS has largely been defeated in the country, its enemies are now turning their guns on each other in at least three more potential conflicts playing out on Syrian territory, that pit Turkey against the Syrian Kurds, Israel against Iran, and the U.S. against Russia.

“The way we look at it is Assad won the war, but the rest of the region doesn’t see it that way,” Andrew Tabler, an expert on Syria at the Washington Institute, said in a recent interview. “They see the outcome very differently. They see Iranian activities there. They see Russian activity. They see Kurdish activities.”

Syria was once the power broker in Lebanon and a major force in the region but is now dependent on the largesse of its few allies. Assad’s military forces are depleted. The most effective pro-Assad fighting forces are militia members and foreign fighters. And Tabler argues that an outcome in which Assad remains in power is unacceptable to both Turkey and Israel.  “That threatens to morph the Syrian civil war into the Syria war,” he said. “This is very similar to what happened in Lebanon in the 1980s—where you had a civil war, initially driven by Palestinian activities there, and then after they departed the scene, the war continued. International players became involved in the Lebanon war—and it tends to prolong wars and makes the outcome far more difficult to obtain.” In Syria’s case, Israel is threatened by the presence of Iranian forces in a country on its border; in Turkey’s, it sees the Kurds as menacing its own territorial integrity. Both powers have been drawn further into Syria’s fighting in recent weeks.

The world looks much different now than it did in the 1980s, however. For one, the countries in the region are embroiled in other regional conflicts: the Iranians and Saudis are engaged in a devastating proxy war in Yemen; Turkey is perennially worried about Kurds, including in Iraq, and external foes, real and perceived; the Trump administration’s decision to move the U.S. Embassy in Israel to Jerusalem has not yet set off the kind of violence that many feared, but given the political realities in the region there’s no assurance it won’t. Nor does the U.S. seem particularly interested in doing anything more in Syria than fight ISIS—a policy that has carried over from the Obama years when the president declined to enforce a “red line” on Assad’s use of chemical weapons on civilians. Assad has now done so multiple times.

On the other hand, other countries in the region are preparing for life with Assad staying in place—no matter how distasteful that may sound to them. “Those countries that directly border Syria, I think you are beginning to see capitalized into their strategic calculation this notion of Assad staying,” Mona Yacoubian, the senior adviser for Syria, Middle East, and North Africa at the U.S. Institute for Peace, told me. “And I think that’s most apparent in Jordan where actions by the Jordanian government suggest that they do believe he is there to stay at least for the short- to medium term.” The country has moved toward opening the official crossing with Syria, is providing less support for Syrian rebels in the south, and has been pushing to get Syrian refugees [currently in Jordan] to return to de-escalation zones negotiated with the Russians.

As for the population that’s left in Syria, four years ago, the UN estimated that 80 percent of the country lived in poverty and that life expectancy had fallen by 20 years, to a little over 55 years. Nor does Syria have hope for the kind of international financing poured into Iraq and Afghanistan for reconstruction, with mixed results. International funders are reluctant to spend that kind of money in Syria for fear it will benefit a regime accused of war crimes. “And when you look at the United Nations, the Security Council, the large aid agencies, and everybody saying … whatever is happening right now needs to stop, but there’s no true action to intervene to end this war, that’s very disheartening,” Attar said. “And if Assad survives all of this, it’s really because of the world’s inaction.”