You are here: Home / Senza categoria / No need to ‘understand’ Isil, just fight its pure evil 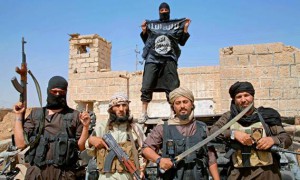 There was a frisson of excitement in some quarters when the latest fatwa from Isil was released. No one will admit that out loud, of course. But to many a boy reared on Princess Leia’s slave-girl-on-a-leash fantasy, the notion of being able to pick out your very own sex slave in a market place has an irresistible lure, despite its revolting immorality. That’s human nature, isn’t it? Sex sells. And no one knows this better than the men recruiting willing fodder for their obscene Caliphate in Syria and Iraq; come join us and you too can have your own Princess Leia, but younger, leaner, more docile; stripped and chained for your private entertainment. You can whip her, burn her, get her to perform any number of obscene pornographic acts for you. It’s God’s will. Insha’Allah.

For young men reared in a culture of gender separation, where sex before marriage is taboo and a woman cannot appear uncovered before them lest she tempt them into sin; to be told that they are doing their duty to God and to their state by sexually using a woman in any way they have ever covertly imagined, is surely a temptation some find hard to resist. This is the potent propaganda that Isil are selling to their many recruits. The slaves are in the main Yazidi women and children, members of a non-Muslim minority group. Last week, we discovered what happened to women deemed too old or unattractive for sex slavery; killed and thrown into mass graves found in Iraq. It sounds barbarous, but, as with the clipboard Nazis of the Third Reich, there are very specific rules to follow. These are carefully calibrated by Isil “theologians”. And so we read their latest hellish ruling which lays down, in ancient biblical terms, the manner in which young girls and women can be raped, assaulted and abused – by and for God’s will.

Beating, burning, or stoning a young girl isn’t a “violation” of their Sharia law, but raping her during menstruation is, as is sleeping with a mother and daughter or two sisters simultaneously. Banal rules. Banal evil. It’s a dystopian nightmare, but it’s happening to hundreds of thousands of young women, mainly Yazidi, in a land not very far from here. The fascination that some sexually repressed males have with the workings of the female body will come as no surprise to many Irish women reared on Catholic canon law. Irish feminists (male and female) have fought against such misogynistic rule for decades. We still do. But we don’t seem to mind it so much when it discriminates against women from other cultures. Of course, we say, the unabashed, blatant, in-your-face, violent misogyny of Isil is horrific. We would never tolerate that in the West – but then we have white privilege. What would we know about other cultures in crisis? So, be careful who you judge, or criticise, or call a tyrant, lest you in turn are labelled racist or even worse, Islamophobic. Though we are quick to judge our own western faiths and secular governments we hold ethical standards for non-westerners so much lower. As one Jewish commentator noted: “When Jews are killed, we make sure the world knows. When Palestinians are killed, the web explodes. So why is it that when Christians are murdered and persecuted en masse, no one seems to care – not even other Christians?” This is moral relativism at its most pernicious.

We are well used to left-liberals blaming every atrocity carried out by Isil and their supporters on the many mistakes of the US, the UK and in the case of the Paris attacks, on French colonial history.

Faisal Saeed Al Mutar, the Iraqi-born writer and human rights activist, has said about this peculiarly leftist trait: “I think 21st-century westerners generally don’t appreciate what they take for granted, because somebody else fought for these rights before they were born. I have given so many speeches around the [US] and I have heard many statements like… ‘We [US] are no better, if not worse, than the Middle East when it comes to women’s rights and gay rights’. These laughable statements generally come from people who have not been outside the US… So I think most of the lack of appreciation of the freedoms in this nation or other western nations have come from ignorance and lack of experience.”

But what is the excuse for Europeans? Our ancestors fought long and hard for the liberties we have in the West. Have we forgotten, as Nick Cohen reminded us recently, “what the men and women of the Enlightenment knew. All faiths in their extreme form carry the possibility of tyranny”.

We have seen it from the Christian Crusades to the Inquisition and now we see it in the Islamic Caliphate. No religion is above criticism. Zealots of all faiths and none should always be opposed.

Yet, as Michael Walzer tells us, “many leftists are so irrationally afraid of an irrational fear of Islam that they haven’t been able to consider the very good reasons for fearing Islamist zealots”.

Currently, I am reading Martin Amis’s latest novel, The Zone of Interest, which he set in Auschwitz. When asked why he wrote on a subject which has been near exhausted by others, he answered: “Because… the Holocaust is going to absent itself from living memory in the very foreseeable future.” Amis has one of his Nazi characters, when asked if they could treat their Jewish prisoners any worse, say: “Oh come on, we don’t eat them.” Mirza Ismail, of the Yazidi Human Rights Organisation, reported this year that: “I met mothers, whose children were torn from them by Isil. These same mothers came to plead for the return of their children, only to be informed, that they, the mothers, had been fed the flesh of their own children by Isil. Children murdered, then fed to their own mothers.”

As a supposedly enlightened, liberal, tolerant people, we don’t like to believe in unadulterated evil.

Remember appeasement? We recall the horror experienced by soldiers who liberated camps like Auschwitz and Birkenwald; how they couldn’t believe that human beings could commit such atrocities against other human beings. Never again, they said. Never again. As children we read about the bravery of Anne Frank and other sacrificed souls and assured ourselves that if only we had known then what we know now, we would have seen that evil for what it was; we would have rescued those children from their horrific fates. We have learned from our mistakes, we assure ourselves. Never again.

Meanwhile we make excuses for why we must refuse the thousands of children fleeing the evil of Isil in Syria and Iraq. In years to come our own children will ask us how we didn’t know what was happening?

Perhaps we need the perspective – the excuse – of time? We already have the luxury of distance. Even Amis, well versed in horror, couldn’t get his head around the sheer evil of Nazism. And then the words of Holocaust survivor Primo Levi came to him. “One must not understand what happened,” said Levi before he died, “because to understand is almost to justify… There is no rationality in the Nazi hatred; it is a hate that is not in us; it is outside man.” Sometimes evil needs just to be opposed, not understood.

And so once again we are in Hannah Arendt territory; Isil and their pseudo-religious fatwas, their rules and regulations, their attention to detail and their law of Sharia, all form a banality of evil. Reared on Western guilt and cultural relativism, we seem to be allergic to making moral judgements and yet, in the face of what can only be called extreme evil, we must. The fight against the regime that now arrogantly boasts the sexual slavery of so many Yazidi women must be part of a greater struggle; against the tyranny of the extremist who should never be tolerated no matter what his faith or creed. Never again.