You are here: Home / MidEastGulf / No moderate dissident in Syria 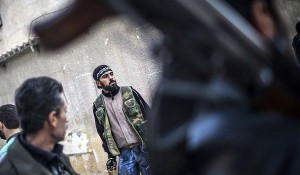 The terrorist actions conducted in Syria prove that all groups which are fighting against the government and people are terrorists and no moderate dissident exists in the country, a prominent Syrian analyst said, according to farsnews.com.

“The terrorist acts being carried out in Syria today prove that despite the international agreements, the countries which support terrorism are still insisting on their position and want to pressure the Syrian government and nation and their friends using the terrorist acts,” Auni al-Homsi said on Sunday.

“The recent blasts showed that the terrorist groups have not changed their behavior and no moderate dissident exists in Syria and they are terrorist groups which implement Saudi Arabia, the US, Turkey and Qatar’s orders,” he added.

Warning that support for the terrorist groups will backfire on Turkey, the West and the US, al-Homsi stressed the necessity for the international community to stand beside the Syrian government to fight against terrorism.

He also underlined that Russia, Syria and Iran are determined to fight against terrorism, adding that political solution is meaningless without suppressing all terrorists.

His remarks came after over 10 people were killed and 35 others injured as a car bomb detonated in the center of the Syrian town of Jableh in the Lattakia Province on Saturday. The bomb went off near a local stadium.

Also in the same day, at least 50 people were killed in the Syrian city of Azaz in Aleppo province in a powerful car bomb explosion targeting civilians in the city, while dozens of others were also wounded.