You are here: Home / Mediterranean / No hope in Libya: the GNC members have decided not to buy into the latest UNSMIL deal 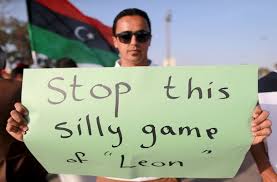 A small gelatina bomb exploded harmlessly outside the GNC yesterday while members were deciding not to buy into the latest UNSMIL deal. A far bigger political bomb went off early this morning when UNSMIL chief Bernardino Leon announced the formation of the unity government was going ahead without them.

“We have decided to go on,” a weary and crumpled Bernardino Leon told a Skirhat press conference in the small hours of this morning, “and we will continue with the formation of a unity government. Tomorrow, we will be ready to propose this government”.

Leon explained: “After consultations with all the Libyans participating in this national dialogue, I come here to tell you that even though we have been waiting for the GNC to make a decision today, unfortunately this decision has not been the one we were expecting in terms of proposing names for the national unity government”.

He continued that none of the obstacles that it knew it was facing would prevent the national dialogue from proposing a government, “ a government of unity, a strong government that will reunite all the Libyans and will allow Libya to overcome the security crisis and the humanitarian crisis that it is facing”.

Leon continued: “So the message tonight is a message of unity. It’s a message of trust. We know well that there are many Libyans who are confused after what has happened today. Let me say that after consulting with many people inside and outside Tripoli, all over Libya, I can tell them we will prevail, that we will be able to propose a government tomorrow. And this government, this agreement, which is not going to change, this agreement that is final, as it was said very clearly by the international community last Friday, will be supported by the huge majority of the Libyans”.

When asked by a journalist how the new government could operate from Tripoli if it was controlled by the GNC, Leon said it had been a long day, during which UNSMIL had talked to a lot of people. “But what I can tell you is that our impression now is that a huge majority of the Libyans, and this includes a huge majority of Tripoli, and this includes we want also to think, the huge majority of the members of the GNC are ready to support a peaceful solution, a political agreement without changes and a unity government that should be announced tomorrow”.