You are here: Home / MidEastGulf / No guns, no money, but ready to hit Islamic State HQ in Raqqa 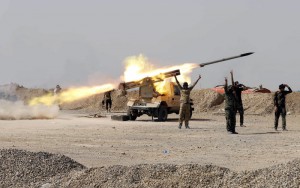 A young Kurdish fighter manning a control post trains his binoculars on the unofficial border between the so-called Islamic State, and the region the Kurds call Rojava. This is the front line for what may be the next major U.S.-backed move against ISIS—a major offensive to take Raqqa, the capital of the Islamic State in Syria.

On these borders, a fragile coalition of Arab and Kurdish fighters say they are preparing for a decisive battle with their boots on the ground and coalition warplanes in the air.

From time to time, sounds of machinegun fire and mortars can be heard.

“Stop, stop!” a fighter from the Free Syrian Army (FSA) shouts at civilians who are fleeing from Raqqa. He fires a warning shot, telling them to come forward slowly, one by one.

The Kurdish and Arab fighters have separate checkpoints at a stretched- out front line inside Raqqa province but about 50 kilometers from the city. They are only separated from the ISIS by a small desert flatland of a few thousand meters with farmhouses scattered here and there. They are armed, at least for the moment, with little but some old Russian Kalashnikovs and Doskha 23mm anti-aircraft guns. But in the war on ISIS they may be the best hope Washington has right now.

Earlier this month, the Obama administration had to admit its $500 million program to train and equip FSA rebels in Aleppo province to fight on the western front against ISIS had failed miserably. As The Daily Beast reported in September, in at least one instance FSA fighters were forced to hand over their weapons to the Syrian branch of al-Qaeda, known as Jabhat al-Nusra. A program intended to produce thousands of fighters had churned out fewer than a dozen who were deemed reliable.

So, according to the men here on the eastern front, the U.S. is hoping to capitalize on the recent successes of Kurdish and Arab rebels in Kobane and Tal Abyad, where, with coalition air support, they pushed ISIS back.

“There are around 20,000 Kurdish fighters, and around 3,000 to 5,000 Arab fighters,” senior Kurdish official Idris Nassan told The Daily Beast in his office in Kobane. That jibes, roughly, with the numbers given by Abu Hamza, an FSA fighter, who says there are a total of 30,000 troops poised to move on Raqqa, but the numbers could not be verified independently.

In the field, one way to spot the difference between the fighters of the Free Syrian Army and those of the Kurdish People’s Protection Units, known as the YPG, is that the FSA soldiers appear to lack strict military discipline, sometimes manning checkpoints without uniforms and in slippers

They are, as they say themselves, reluctant soldiers. Many came from Raqqa and Deir ar-Zour, another eastern Syrian city, but were driven out by ISIS during clashes in January 2014. They consist of a ragtag band of Arab and also Kurdish fighters who are eager to go back to their home towns. Holding up a Kalashnikov, local FSA commander Abu Isa ar-Raqqawi says, “We were forced to hold this weapon, it was not our will.”

Their flight from ISIS put these FSA fighters in the territory of an unlikely ally. Previously they had fought against the YPG and accused it of links to the regime of Bashar al-Assad.

Unlike the FSA, the multi-ethnic but mainly Kurdish YPG force has dozens of years of experience fighting the well-equipped Turkish army as part of the Kurdistan Workers Party (PKK) established in 1978 by Abdullah Ocalan, who is now held in an island prison near Istanbul. Until shortly before his capture in 1999, Ocalan had been able to operate out of Syrian territory with the cooperation of Hafiz al-Assad, Bashar al-Assad’s father and predecessor as dictator. So mistrust by other anti-Assad fighters today has deep roots.

But circumstances change and ideologies evolve. The PKK started as a Marxist group that wanted to create a greater Kurdistan, but it has since dropped its maximalist demands for local self-governance for the Kurds in Iran, Iraq, Syria, and Turkey. The PKK and YPG are working to expand their base to include more Arabs and say they envisage tight cooperation with regions that may not have Kurdish majorities, like Raqqa.

According to Ocalan’s utopian project of “democratic confederalism,” there should be a bottom-up democratic system based on local communities and councils that go beyond existing borders or ethnic divisions, rendering borders and the nation-state irrelevant.

This would ideally result in autonomy for the Kurds in the Middle East without changing the existing national borders. But it would also require local cooperation among Kurds and their Arab, Turkish, and Iranian neighbors who have denied the Kurds their own state.

“In democratic confederalism, we don’t see ourselves as Arabs and Kurds. We all see each other as part of the nation of Syria, based on the brotherhood of nations,” says YPG commander Heval Amude, sipping his tea.

“That’s why we don’t care if Raqqa is an Arab city or not,” he says, explaining why a largely Kurdish force would spend blood and resources to retake it.

“We realize we need to liberate both Arab and Kurdish areas and work together under one umbrella to build a new democratic Syria,” says Amude.

So, in an apparent bid to replace or embrace other Syrian opposition forces that have failed, the YPG and FSA here say they have created a new grouping called the Syrian Democratic Forces which is, in Amude’s words, “an alternative for the regime.”

This fragile coalition is now virtually the only means the United States has left to defeat the Islamic State in its capital of Raqqa. Once that happens, if it happens, these fighters claim they can cut ISIS off from the Iraqi city of Mosul, making it easier for the US-led coalition and its various Iraqi allies to retake it and also to liberate Sinjar, where hundreds of Kurdish Yazidi women were enslaved by ISIS.

Here at the heart of the self-declared Islamic State in the east, Moscow’s forces have not been much in evidence, preferring to operate mainly against non-ISIS groups in the west of the country.

“We see Russia as the enemy, they attacked Daesh [ISIS] once,” said Abu Awad, commander of a forward position at Ayn al-Issa, “but they attacked our positions in Hama, Aleppo, and Idlib many times.”

Kurdish YPG commander Amude is critical of Russia, and prefers the U.S.-led coalition. “Russia until now only helps the regime, but the coalition led by the U.S. helped us since Kobane,” he said. “The U.S. will help us liberate until Afrin,” which would mean the YPG moving west along the Turkish border as well as south and east toward Raqqa.

“For us, Russia, Assad, or ISIS, is no difference,” said Abu Isa ar-Raqqawi. “Wherever you have the regime, you have Daesh,” he said, using the Arabic acronym for ISIS. “Many of Assad’s regime’s officers were embedded with Daesh.” he claimed.

In practical terms right now, however, problems are evident on the ground. Some of the YPG fighters actually come from Turkey and often have problems communicating at checkpoints with FSA fighters who speak Arabic, not Turkish and Kurdish.

And as I traveled with Kurdish fighters it was obvious the U.S. needs to work to build more trust between the FSA and YPG combatants. After passing an FSA checkpoint on the road from Tal Abyad to Ayn al-Issa, one young YPG fighter said the FSA killed one man of his village.

“We fought them in Serikaniye in 2013 after they attacked us. After ISIS got stronger, they joined us,” a young blue-eyed YPG fighter named Heval Delil told me as we rode in the back of a pick-up truck. “Now our relations are good. It is okay from our side, but I don’t know about them.”

Grey-haired Hikmet Osman, in his fifties, also distrusts the FSA. “If we go to Raqqa, they will be in the front,” he said. “Raqqa is not Kurdish. But if the FSA is attacked they run away.”

This raises the potentially key question of whether the YPG’s Arab allies are strong enough to control the city of Raqqa if it is ever taken. In July, YPG fighters had to expel ISIS militants from Ayn al-Issa, after FSA-fighters fled from their positions coming under attack.

The YPG and the Kurdish-led administration already have some difficulties managing the Arab town of Tal Abyad, setting up a local multi-ethnic council consisting of local Turkmen, Arabs, and some Kurds.

“Even if we don’t fully trust them [Arabs] yet, we are struggling to make them trust us,” says a YPG commander back in the Arab-majority town of Tal Abyad, who asked not to be named.

So far, he says, 30 percent of the YPG and local police are now Arabs. Furthermore, most checkpoints don’t fly the YPG flag, but the green-white-black flag of the Syrian revolution in order to create trust.

“It’s forbidden for us to go into the city; this is the job of the local police. I only walk in security zones,” he said in a YPG base on the outskirts.

On October 11, 50 tons of small arms ammunition reportedly were dropped by the U.S. to these Syrian Arab fighters in the province of Hasakah, and not to the YPG—an effort to mollify Turkey, which is concerned that arms given to the YPG will wind up with the PKK and be used against Turkish soldiers.

But, in fact, both the YPG and FSA fighters on the front lines of Raqqa are poorly armed and say they haven’t seen any U.S. support yet.

“Look at me,” FSA fighter Abu Ansaari said, pointing at his old weapon and shabby militia clothes. “Do you see any U.S. weapons?”

While we were preparing to leave the front line, FSA commander Abu Awad, suddenly lost his temper, saying he barely has money to provide for his wife and kids.

“We are ready, but we have no ammunition, cars or nothing. I was in Kobani for three years, but I didn’t even get paid one dollar! There is no support at all.”

“Can we liberate Raqqa with just a Kalashnikov?” he shouts.

Such outbursts raise the question, of course, whether the much talked about offensive against Raqqa will ever take place. But a YPG commander named Rubar on the front line 3,000 meters from ISIS positions, where movement is clearly visible, remains steadfast and confident.

“In Syria, we are in the best position to defeat Daesh,” he said. “We are the only force that can beat them. If we can take some strategic points, it will be very easy to take Raqqa,” he concluded.

And if not these boots on the ground, then whose?