You are here: Home / Africa / No end in sight for Burundi violence 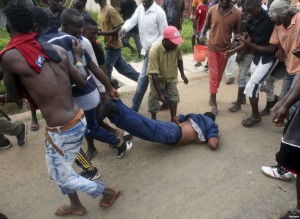 A delegation from the United Nations Security Council has met Burundi’s president in a bid to quell political violence there. But the US envoy says little has been achieved.

The diplomats visited the Burundi capital Bujumbura for talks with President Pierre Nkurunziza on Thursday.

Violence has been ongoing in the central African country since last year when the president held an election seeking a third term despite fierce opposition. His critics say the election violates the constitution.

The United Nations says over 400 people have been killed in clashes between supporters and opponents of the president. More than 220,000 have fled the country.

The political confrontation has escalated tension between the majority Hutus and the minority Tutsis.

After meeting with the president, US Ambassador to the UN Samantha Power acknowledged that the envoys had not achieved as much as she thought they would. She indicated that they will continue to push the president to de-escalate the situation.

The president has rejected the deployment of an African peacekeeping force in his country.

UN member countries are increasingly concerned that Burundi may slide into the kind of serious ethnic conflict seen more than 20 years ago in neighboring Rwanda, where a genocide took place.