You are here: Home / MidEastGulf / No appeal from Turkey for NATO support 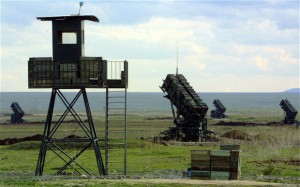 Turkey has not appealed to NATO for support, the Turkish foreign ministry said Oct. 9.

The statement said that Moscow has not sent a delegation to Ankara yet to discuss the violation of Turkish airspace by the planes of the Russian Air Force.

Moscow has previously stated that it is ready to discuss the incident with Turkey in connection with the violation of its airspace by the planes of the Russian Air Force.

Turkey hopes that it will not have to seek support from NATO after the Russian Air Force aircraft, involved in the military operations in Syria, violated the country’s airspace, the Turkish presidential administration told Trend earlier.

“Turkey and Russia can resolve this issue together, but Moscow must not forget that Turkey’s airspace is at the same time the airspace of NATO,” the source said.

NATO Secretary General Jens Stoltenberg said Oct. 8 that the alliance is ready to defend allies, including Turkey, against any threats, and discusses the need for extra help with the Turkish government.

The Turkish Air Force planes were also involved with the aim of warning following this violation.

The Russian planes then left the Turkish airspace.

After the incident, the Russian ambassador to Ankara was summoned to the Turkish foreign ministry to clarify the situation.

Turkey will not allow the repeated violation of its airspace by the planes of the Russian Air Forces, Turkish President Recep Tayyip Erdogan said earlier.

“I think that Russia will not want to spoil relations with Turkey,” President Erdogan said.

He also said that if Russia loses Turkey, it will lose a lot.

Last week, Russian President Vladimir Putin appealed to the Federation Council for permission to use the Russian Armed Forces abroad. The Senate approved this request. The head of the Russian Presidential Administration Sergey Ivanov told reporters that the decision concerns Syria and the matter rests in the operation of the Military Air Forces.

Russia sent military aircraft to Syria after Damascus’s request. The Russian Military Forces are inflicting strikes on the positions of the Islamic State terrorist organization in Syria.