You are here: Home / Africa / Nineteen killed in fighting between army and al-Shabaab in Somalia 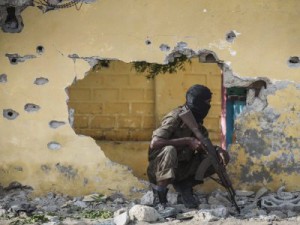 At least 19 people were killed Tuesday in fierce fighting between Somali and African Union forces and al-Shabaab militants, officials and witnesses said.

The allied troops launched a counter-attack against the radical Islamist group which had captured the town of Afgoye, 30 kilometres south-west of the capital Mogadishu, according to security officials.

A police station had earlier been targeted by a suicide car bomber, followed by militants who fought their way into the town’s neighbourhoods from different directions.

“Fighting was under way until this evening to push insurgents out of parts of town they are still holding,” senior security official Mohamed Hassan said, adding that reinforcements were on their way to Afgoye.

Al-Shabaab said on pro-insurgent radio Andalus that it had captured the town and killed many people.