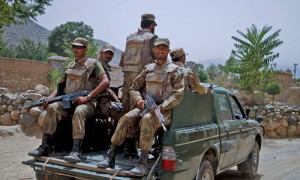 At least nine militant ‘commanders’, who were reportedly involved in the killing of 44 personnel from frontier works department, were killed on July 19 during a clash with Frontier Corps (FC) in Awaran District of Balochistan, reports Times of India.

Frontier Corps, on a tip off about the presence of militants, launched a search operation. On seeing the FC personnel, the militants opened fire on them and in retaliatory fire nine of them were killed. The FC seized large cache of arms and explosives from the possession of the militants.