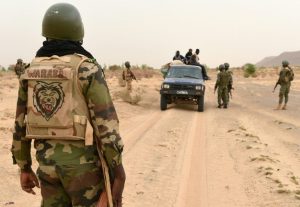 Nine Malian soldiers were killed and five wounded in an area regularly targeted by jihadist groups, as the commander of France’s counter-terrorism force for the region said an operation on the Burkina Faso border was ongoin, like reported digitaljournal.com.

“A supply mission for the national armed forces fell into an ambush between Dogofri and Nampala. The initial toll is nine dead and five wounded,” commerce minister and government spokesman Abdel Karim Konate said in a statement.

He condemned the “cowardly and barbaric act” and said “our commitment, as well as that of our partners, is to relentlessly pursue the fight against terrorism and drug trafficking” in Mali.

A Malian military source earlier said eight soldiers were killed and four wounded in the attack in the central region of Segou.

The troops’ vehicle hit a mine and they were then ambushed by the group, a Malian security source told AFP, recounting what is a familiar jihadist tactic.

Nampala, a garrison town near the Mauritanian border, has been targeted by several jihadist attacks.

Troops from Operation Barkhane, a French counterterrorism operation, announced at the weekend they had killed or captured 20 jihadists in the forest of Foulsare near the border of Mali and Burkina Faso.

Barkhane’s commander Francois-Xavier de Woillemont said in Ouagadougou the operation was not yet over, and the final goal of such missions was “to get rid of the terrorists” who “harass local people and stop them living a normal life.”

It was the next step in operations undertaken in the zone “where we know that terrorists come to hide,” he added.

Last July, 17 soldiers were killed in an attack on a military base in Nampala claimed by the Islamist organisation Ansar Dine.

A similar attack on the town in January 2015 claimed the lives of 11 Malian soldiers, who struggle to keep security in this sprawling west African nation despite the presence of French and United Nations troops.

Residents of Niono, to the south of Nampala, told AFP they had seen reinforcements heading towards the area of Tuesday’s attack.

The region where the soldiers were killed on Tuesday, Segou, is also rife with tensions between ethnic groups who dispute the use of land for farming and raising cattle.

Northern Mali fell to jihadist groups linked to Al-Qaeda in March 2012, and although these forces were driven out of key towns by a French-led military intervention the following year, the Islamists have now spread further south.