You are here: Home / Mediterranean / Nine killed in clashes between Islamic State and other militants in eastern Libya 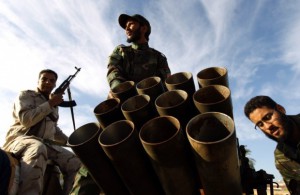 At least nine fighters were killed in clashes on Friday between Islamic State and another Islamist force in the eastern Libyan city of Derna, a source in one group said.

Fighting had first erupted in Derna – a long-time gathering point for jihadists – on Tuesday after a leader in the Islamist umbrella group Majlis al-Shura was killed. At least 20 people were killed.

New clashes broke out in one district on Friday and nine fighters were killed, the source said. No more details were immediately available.

Islamic State and other Islamist militant groups have thrived in Libya since two rival governments began fighting for control, leaving a security vacuum four years after the overthrow of Muammar Gaddafi.

The rapid rise in Libya of Islamic State, which first emerged in Syria and Iraq, is worrying Western powers who fear the militant group will forge a base just across the Mediterranean from mainland Europe.

The Majlis al-Shura declared holy war, or jihad, on Islamic State in Derna after Tuesday’s clashes, in which four Majlis leaders were killed.

Islamic State group has carried out attacks on oilfields and embassies and also claimed the killing of dozens of Egyptian and Ethiopian Christians. It has also attacked both governments.

The official government has been based in the east since losing the capital Tripoli in August to rival group Libya Dawn, which set up its own administration with some Islamist links.