You are here: Home / MidEastGulf / Nine Americans arrested by Saudi Arabia in terrorism crackdown
Suspects were among 33 charged over past week, according to local press reports… 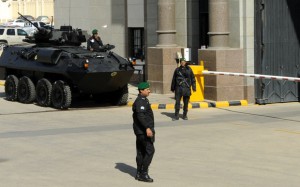 Nine Americans have been arrested on terrorism charges in Saudi Arabia, part of a group of 33 suspects charged over the past week.

According to an unnamed source cited by the Saudi Gazette, four of the Americans were arrested on Monday while another five were arrested later in the week.

Fourteen Saudis, three Yemenis, two Syrians, an Indonesian, a Filipino, an Emirati, a Palestinian and a citizen of Kazakhstan were all also arrested last week.

About 62 Americans have been identified as having travelled or attempted to travel to join IS in Syria and Iraq.

Saudi Arabia has been increasingly clamping down on militant groups’ activities within the kingdom, particularly following a series of bomb attacks primarily targeting the country’s Shia minority.

An attack on a Shia mosque in the al-Ahsa district in the country’s Eastern Province killed four people on Friday and injured 18.

The suspect was listed by the Interior Ministry as 22-year-old Abdulrahman al-Tuwaijri, a Saudi citizen.

The Islamic State group consider Shia to be non-Muslims and have frequently targeted them across the Middle East.

Despite the kingdom’s Wahhabist underpinnings often being cited as the source of IS ideology, the group has sworn to overthrow the country’s rulers.

In response to the execution early in January of 43 IS and al-Qaeda suspects, IS released a statement threatening the House of Saud with “eradication”.

“The Islamic State always seeks to free prisoners, but we calculate that the ending of the issues of prisoners will not happen except with the eradication of the rule of tyrants, and then destroying their prisons and razing them to the ground,” IS reportedly said.