You are here: Home / Africa / Nigeria’s war against Boko Haram takes to the airwaves by an unexpected new psychological weapon: radio 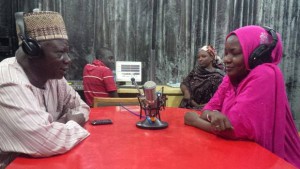 While helicopter gunships and armoured vehicles have led the campaign against Boko Haram in northern Nigeria this year, the military hardware is now being reinforced by an unexpected new psychological weapon: radio broadcasts of soccer news and farm reports, wrote Globeandmail.com .

In a bare-bones radio studio in this northern city, a small staff of broadcasters has entered the battle for hearts and minds in Boko Haram territory. Much of their work is basic reporting on mundane subjects such as farm irrigation and sports news, but it could still play a role in neutralizing Boko Haram’s propaganda and regaining support in the strongholds of the Islamist extremists.

The key to the radio strategy is its use of Kanuri – the language of an estimated 80 to 90 per cent of Boko Haram members and most other citizens in Borno state, the northeastern region that has been devastated by the radical Islamist militia. It’s also commonly spoken in the border regions of Cameroon, Chad and Niger, where the insurgents operate.

Until now, the Nigerian government has neglected the Kanuri language, leaving few voices to counteract Boko Haram’s message in the extremist militia’s birthplace in the northeast. Those who live under the daily threat of Boko Haram attack often feel isolated and alone.

“There’s a feeling of dejection, that nobody cares about them,” says Umar Tudunwada, general manager of Freedom Radio, the independent Kano-based station that hosts and produces the Kanuri-language radio program.

“They’re not getting information from anyone. Nobody comes to them to hear their side of the story. But now they have a new sense of belonging, a sense that society cares. Radio is reaching them in their own vernacular.”

The daily radio show is called Dandal Kura – “great hall” or “meeting place” in the Kanuri language. So far it broadcasts just one hour a day, using a former BBC frequency that listeners are accustomed to monitoring, but Mr. Tudunwada aims to expand it to three hours daily by June and eventually to a full station. It uses shortwave, a popular choice in northern Nigeria, where people buy cheap Chinese-made shortwave radios for a few dollars in the local markets.

The radio program, launched in January, is financed by USAID, the overseas development agency of the United States government, but all of its editorial content and production is done by Nigerians without foreign involvement. It also broadcasts into the Kanuri-speaking regions of Chad, Cameroon and Niger.

While it covers a wide range of subjects beyond the insurgency, Dandal Kura is unapologetic about its role in the propaganda wars. Its founders know that Boko Haram has been savvy about using social media to transmit its message, reinforcing the fearsome image that it spreads by word of mouth through its suicide bombs and village attacks.

“People believe everything they hear about Boko Haram,” Mr. Tudunwada says. “They believe Boko Haram are invincible. It’s only through our program that they know that Boko Haram are not superhuman – they can be killed. It gives them courage.”

There are a few other Kanuri-language programs on FM radio in the northeastern states, but they don’t reach beyond a very limited distance in the capital cities and are plagued by electricity outages. Dandal Kura, on the other hand, is so accessible that it can even be heard on cheap cellphones, through an “audio on demand” service, by dialling a short code and paying a nominal fee.

One of its advisers is David Smith, a Canadian media consultant based in Johannesburg who helped set up radio networks elsewhere in Africa including in Somalia, the Democratic Republic of Congo and the Central African Republic.

He says radio is essential in the regions where Boko Haram operates. “It’s an area that has very little infrastructure and a high rate of illiteracy, and there really is no outside information for the vast majority of people, aside from radio,” he said.

A regional force of up to 10,000 soldiers – from Nigeria, Chad, Cameroon and Niger – is due to be deployed against Boko Haram in the next few weeks, with support from the African Union and the United Nations. “Dandal Kura will be a pillar in broadcasting the peacekeeping operation,” Mr. Smith said.

“It’s important that it becomes a regional program, not just local, so that people know that Boko Haram is not just a Nigerian problem, and that people are banding together to defeat it.”

Abdalla Uba Adamu, a professor of media and cultural communication at Bayero University in Kano, notes that the Kanuri language has traditionally been swamped by Hausa, the main language of northern Nigeria. “Millions of native Kanuri speakers are shut out of the discourse on counterinsurgency, as well as narrative conversation about current affairs, being almost always broadcast in the Hausa language,” he said.

“So the idea behind Dandal Kura is quite welcome. It provides hope for those without hope.”