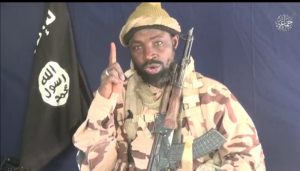 Scorned and underrated, Abubakar Shekau, the leader of Jama’atu Ahlul Sunnah Lidda’awatu Wal-Jihad (JAS), otherwise known as Boko Haram, is currently pulling a massive stealth strategy of organisational makeover destined to connect the north-east, the north-west and the north-central in a bewildering expansionist agenda, like reported by premiumtimesng.com.

Defined by welcoming former apostates; engaging in factional reconciliations; admitting of modest ideological shifts, and proposing a balanced role for clerics and combatants in his group, Shekau is on the move to consolidate his ranks and establish himself as the ‘African Jihadi Caliph’ after his 2012-13 falling out with Al Qaeda, the embattled Islamic State in Iraq and the Levent.

Often portrayed as silly sick bag, on account of his frequent melodramatic video appearances, where he is either dancing, singing, mimicking others or indiscriminately shooting machine gun into the air, insurgency experts and knowledgeable sources on the identity of social movements in the Nigerian northeast, believe Shekau is emerging more of a strategic and calculated schemer than past or current assessment of him is admitting.

Insurgency experts in Maiduguri and Abuja told Humangle that no other leader has so far exerted comparable influence to sustain such a bloody villainy in the now decade-old insurgency which has consumed about 30,000 lives and scattered more than two million citizens into a cruel internal flight from their homes.

After the demise of Muhammed Yusuf in 1999 when he became the putative leader of Boko Haram, and the immediate period of floundering and mediocre Shekau leadership, during which he survived several coups and counter-coups by even far more superior fighting forces within the jihadi community, the wily insurgent has embraced a far-reaching restyling with an unmistakable eye on expansionist ambitions.

Experts date this remodelling to 2012 when he lived in Kano, Northwest Nigeria, before moving to the remote forest areas of Alagarno and Sambisa in Borno State in the Northeast. HumAngle’s own investigations show that after executing several of his associates at the slightest provocation, Shekau appeared to have come round to the view that this excesses was responsible for the defection of hundreds of previous members across Nigeria and into the diaspora, even while others joined forces with other insurgents to form ANSARU in 2012 and ISWAP in 2016.

With a studied eye on current developments within rival groups, Shekau staked a handsome bet: ANSARU evidently had not grown in any prestige, because of, according to sources, the lack of leadership; while ISWAP continues to be bogged down by constant leadership feud. In the light of all these, Shekau’s smartest move, it seemed, was to invest in growth and expansion.

Multiple sources knowledgeable about the inner workings of Shekau’s group started noticing an astonishingly tolerant evolution in him, adopting a lenient posture towards his troops and commanders. He is believed to be currently extending a hand of reconciliation to defectors, something previously unthinkable, although he remains agnostic towards the Islamic State West Africa (ISWAP) and its members, to which a defected member of Shekau’s flock said, “He still has zero-tolerance them.”

The deft weaving of alliance and the development of a renewed cosy gesture to others have invariably eased his expanded footprints, starting from the lucrative Lake Chad region through, the north-central zones of the country, to the north-west regions. All these developments speak to a new vision of the insurgency; and to the ultimate purpose of a caliphate, insights that appear to have evaded the radar of scholars and the security forces.

In the Lake Chad basin area, Shekau courted Sa’alaba and Bakura, two prominent fighters who were reluctant to commit to any side during the feud between the late Abu Musab [son of the group’s founder Yusuf] and the late Mamman Nur whose ISWAP fighters duelled Shekau-led Boko Haram forces in 2016.

With the Sa’alaba/Bakura group in the play, their over 300 fighters, as at December 2018, pledged allegiance to Shekau early in 2019 dramatically redrawing the map of the resource-rich Lake Chad basin as a contested terrain which ISWAP had monopolized for a while.

Unconfirmed reports claimed that this Shekau’s manoeuvre, of offering fighters groups under him which are operating outside of the Sambisa general area in central and southern Borno, and in parts of Cameroon, to operate semi-autonomously, is the critical factor helping to cement these new alliances. The idea of a sub-faction, with Shekau serving only as a spiritual leader, became a win-win that offered major attraction to many fighters as to the expansionist Shekau himself.

Thus, fighters who defected from Boko Haram, but showed no interest in joining the government’s safe corridor window suddenly became part of the groups showing interest in Shekau’s new offerings. HumAngle sources believe that these are fighters Shekau is particularly courting for a measure of an expanded alliance by licensing them to “go to more than 10 locations within and outside Nigeria and fight as members of JAS,” according to source familiar with the group’s new big-tent programme.

This mother-breast strategy appears to have hit the chord for many as one former fighter told HumAngle that after fleeing Sambisa Forest in 2018 to Kano, he could not find a job to do, a fate that also affected many of his comrades in arms who found it hard to reintegrate into the civil society in northern Nigeria. Every day, they claimed, they were afraid to meet someone from Maiduguri who knew them and life became a nightmare. “Some of us joined ANSARU and moved to the forests in Northwest Nigeria because, at any rate, it was very difficult to find jobs in the cities,” said the former fighter.

Now that “Imam Shekau has created cells in Niger and Zamfara states we are free to rejoin the group without the fear of reprisals,” he added.

Shekau’s ideological shift is at its striking peak. His departure from the past seemed total that he had soft-pedalled to the point of categorising Muslims living outside his fold not as takfiris (apostates) but now in welcoming tones as “brothers.” Not all past allies and current freelancer fighters are believers yet, but, according to sources, they are openminded enough to venture a try, like fighters in Taraba, Kogi, Katsina and Sokoto states who are currently in the process of sealing such allegiance, according to competent sources and as already disclosed in an exclusive report by HumAngle on June 16.

What has given momentum to this strategy of sealing alliances, HumAngle learnt, was a prudent of theology, culture and history. Before any allegiance is sealed, Shekau will typically normally send emissaries to the location, carry out investigations and explain clearly his ideology, and speak of the value of strength in unity. A historian of the region said this was a complete resort to empire-building lessons from the 19th century Kanem Borno.

So when there is an understanding, after the back and forth interactions, the emissaries will accept the Bai’a (pledge of allegiance) on behalf of Shekau and stay back to organise the Katiba (detachment) in different components – Shurah Council, Jaish (military), Amniyat or Sariya (intelligence), Hisbah (police), I’ilan (media unit), among other structures.

Typical example is the Sa’alaba/Bakura in the Republic of Niger, operating close to the border with Nigeria, that has the above structure in place and is reported to have the largest number of fighters (Katiba) outside the Sambisa general area with about 1,000 fighters. This is next in strategic importance to Shekau’s Katibas in Cameroon, Republic of Chad and Niger State, North-Central Nigeria and Zamfara in Northwest Nigeria.

It remains unclear here if the Nigerian government and international partners in the war against terrorism understand or have plans to alter or indeed forestall this expansionist programme of Boko Haram.

Notwithstanding that Shekau’s fighters have been under intense attacks from both the Nigerian military and the Multi-National Joint Task Force, the group currently faces little or no resistance from counterintelligence and counter doctrinal messaging perspective to dent their current violent expansionist onslaught.