You are here: Home / Africa / Nigeria’s Military says it is closing in on Boko Haram 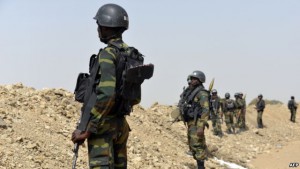 Nigeria’s military called on Boko Haram militants to surrender, saying it was closing in on them. Spokesman Colonel Sani Kukasheka Usman said the army knows all the Boko Haram hideouts and camps.

The military’s warnings came as twin suicide bombings killed at least nine people, and wounded 29 others, in northern Cameroon, in an attack local and security officials have blamed on Boko Haram.

Colonel Usman said the militants have resorted to suicide bombings as a way to remain relevant even though their capacity has been greatly diminished by the Nigerian military.

“As you know we have this presidential mandate to make sure that we are able to defeat Boko Haram terrorists before the end of December 2015. In line with that we have been working so hard and gradually we closing in on them. And it becomes absolutely necessary to alert the public and also warn the Boko Haram terrorists that they should lay down their arms, they should surrender before we finally deal decisively with them,” he said.

“While the air force doing the aerial bombardment, our people on the ground are mopping up and closing in. So we mean business,” Usman said.

With respect to Boko Haram’s weekend violence that claimed nearly 41 lives on the border with Cameroon, Usman said the militants are trying to make themselves relevant in a last ditch effort.

“As you remember, we warned the public also that there are a few militants that are escaping and they want to remain relevant that is why they insist on suicide bombings. But beyond that, they lack the capability to thrive the way they used to do,” Usman said.

“Military operations are gradual processes. We have phases, and we decided to send a warning. Remember this is the second warning we are sending across to the public. The first was to the terrorists and of course appealing to their family members, relatives and friends who know them so that they can see reason to lay down their arms before we finally, decisively deal with them,” he said.