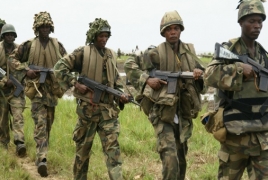 Nigeria’s military killed and quickly buried the bodies of at least 300 Shia Muslims in an unjustified attack in the northern Zaria city earlier this month, Human Rights Watch (HRW) has said, according to BBC News.

The bodies were buried without family members’ permission, it added.

Military spokesman Brig General Rabe Abubakar told the BBC the army had not killed anyone.

Reports of the deaths sparked outrage among Shia around the world and Iran called for their protection.

HRW said Nigeria’s army version of events “does not stack up” and called for an independent judicial investigation into what happened.

The Shia have rejected a committee set up by the government to look into the incident, saying it would be biased.

“At best it was a brutal overreaction and at worst it was a planned attack on the minority Shia group,” HRW Africa direction Daniel Bekele said.

The military accuses the pro-Iranian sect of trying to assassinate army chief Gen Tukur Buratai, which it denies.

It also released images purportedly showing Shia with sticks and some throwing stones at them when they tried to pass through a makeshift roadblock erected by the group.

But Human Rights Watch says there has been no “credible information” that any soldiers were injured or killed.