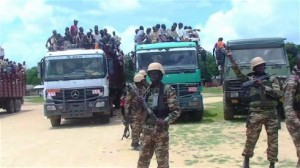 In a move some say violates international law and that Nigeria’s government called “inhumane,” Cameroon has forcibly sent home as many as 15,000 Nigerians who entered its territory fleeing attacks by the Islamist group Boko Haram.

The Nigerians, who had not formerly applied for asylum in Cameroon, had been living within host communities or had taken up temporary shelter in fields along the border region, in the hope of returning when the violence subsided.

But days turned into weeks and weeks turned into months, and in July, security forces began deporting them, ostensibly over fears that they could have ties to Boko Haram, which has been responsible for a recent string of suicide bombings and other deadly attacks in Cameroon’s Far North Region.

“At least five [Boko Haram] suicide attacks have been recorded in the region since 12 July,” Hans Heungoup, an analyst with International Crisis Group (ICG), told IRIN. “And the security situation remains precarious. It is the latter which made the government decide to send home Nigerians, who were themselves fleeing Boko Haram.”

Cameroonian government spokesman Issa Tchiroma Bakary said the decision was for the good of the country.

“We are protecting ourselves,” he told IRIN. “We are preventing penetration into our territory of anyone who does not inspire confidence in us. If, within our territory, we realise that there are accomplices, disguised as Boko Haram, our responsibility is to send them back to their own country.”

But local and international rights groups said the deportation of Nigerians who had fled their own country due to violence was neither legal nor compassionate.

“Where is traditional African solidarity?” asked Georges Mandjeck, a member of the Cameroon Organisation for the Promotion of Rights, an NGO based in Yaoundé. “Refugees’ right to protection is being trampled (on).”

“Everyone should be able to enjoy refugee protection status,” Mandjeck told IRIN. “It seems that the government, in its rage to end terrorism, put them – asylum seekers awaiting permits to enter and persons in transit – in the same boat [as terrorists].”

Odile Yetna from Tribes Without Borders, another Yaoundé-based rights group, said: “It’s hard, but it would have been wiser to call for help to resettle newcomers.”

“These refugees are people who have crossed an international border. Their return is a huge risk for them,” Yetna said, adding that she was afraid of them falling into the hands of Boko Haram and being persecuted.

The UN’s refugee agency, UNHCR, said Cameroon needed to respect the rights of those seeking refuge.

“We share their [Cameroonian authorities] commitment to ensure the safety and protection of Nigerians in need, while ensuring at the same time, the safety of their own citizens and the border areas,” Khassim Diagne, the head of UNHCR in Cameroon, told IRIN.

Diagne said UNHCR had been encouraging Nigerian refugees who crossed into Cameroon to settle further inland, and more importantly, to register in camps where they could receive assistance and protection. They have also been advocating on behalf of those who can’t or won’t go to the camps.

“We remind the government that there are international principles and norms that must be respected, even in the face of serious security problems,” he said. “UNHCR will continue to monitor the situation of refugees and returnees, while stressing that the protection and humanitarian assistance for returnees is becoming increasingly difficult because of difficulties of access and security.”

“Expulsions of undocumented Nigerian migrants in Cameroon could have an impact, in the short term, on the relations between the two countries, over priority differences in the fight against Boko Haram and the enforcement of border regulations,” ICG’s Heungoup said.

In the longer term, the deportations could also negatively affect economic relations and trade flows between the two countries.

Nigerian authorities claimed they were never warned that their citizens would be sent back and deplored the way in which it was done.

“Our compatriots were expelled because of the intensification of Boko Haram activities in Nigeria,” said Sa’ad Bello, head of the National Agency for Disaster Management (NEMA) in Nigeria. “We were never informed of the transfer of refugees and now we see that many have been abused, transported in trucks like animals and then dumped at home in inhumane conditions.”

Christopher Nyaneh, a Nigerian entrepreneur living in Yaoundé, told IRIN: “Since Boko Haram began killing, they [Cameroon authorities] now treat our brothers, who have chosen to take refuge in Cameroon, like terrorists. This is putting even more of our brothers on the road to exile and wandering.”