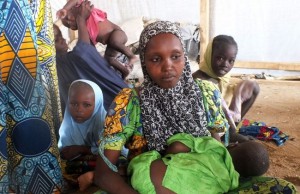 A refugee camp deep inside Cameroon is receiving around a hundred people each day who are fleeing Islamist violence in Nigeria, the UN High Commissioner for Refugees (UNHCR) reported Tuesday.

Families are leaving unstable and dangerous zones on the Nigeria-Cameroon border “and seeking shelter some 100 kilometres (62 miles) inland at the Minawao camp,” run by UNHCR and its partners, spokesman Leo Dobbs said.

Most of the new arrivals had initially stayed close to the border after fleeing clashes between Boko Haram jihadis and Nigerian troops in the hope they could return home quickly, Dobbs added.

Refugees said they had run from militant attacks in Nigeria’s Borno state. The Boko Haram insurgency has killed more than 15,000 people in Nigeria since 2009.

The UNHCR and Cameroon’s government are trying to contact refugees remaining in border territory to see whether they would prefer to come to Minawao or be taken to secure zones inside Nigeria, Dobbs said.

The UN agency estimates that nearly 12,000 unregistered refugees are in northern Cameroon, while Camerooonian authorities put the figure at 17,000.

Boko Haram, which has extended its campaign across Nigeria’s borders and prompted a regional military response, carried out its first suicide bombing in Cameroon last Sunday.

Two women wearing the full Islamic veil blew themselves up in the far northern border town of Fotokol, killing 11 people.