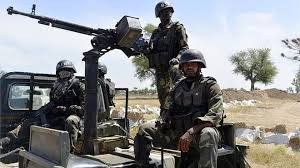 Nigerian villagers claimed Tuesday that Cameroonian troops in cross-border pursuit of Boko Haram Islamic extremists shot and killed at least 40 civilians — the third such accusation of reckless killings by the Cameroonians in recent weeks.

Muhammad Abba, deputy commander of a civilian self-defence group, said relatives still trapped in the border region called him to say they counted at least 40 corpses scattered around the Gwadale border community in northeast Nigeria after Cameroonian troops crossed the border Monday.

The first story about such slayings came from refugees who said Cameroonian soldiers Nov. 30 killed about 150 people, stole cattle and razed entire villages along a 150-kilometre (95-mile) stretch of the border. It came days after diplomats said Nigerian officials refused requests from neighbouring states to evacuate civilians and create a no-go zone along the border to prevent incursions by the extremists.

Cameroon has said its troops are deployed in joint operations with Nigerian soldiers and follow strict humanitarian rules of war. Nigerian government officials have not commented on the reports.

Abba told The Associated Press that one of his brothers who survived said the Cameroonians arrived in the early hours of Monday “and began to shoot sporadically. Most of our people who ran out of their houses in fear were killed by bullets … corpses still litter the ground with no one attending to them.”

He said he was worried because he hasn’t heard from his eldest son since the attack.

“Some had their throats slit, others died from gunshots,” said self-defence fighter Ibrahim Musa.