You are here: Home / Africa / Nigerian troops to train in Boko Haram’s ex-bastion

Nigeria’s military will turn the Sambisa forest, a former bastion of militant Islamist group Boko Haram, into a training centre for its troops, the army chief has said to bbc.com 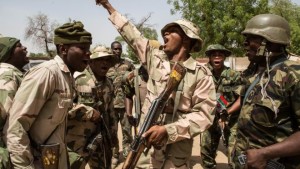 This would prevent the militants from rebuilding a presence in the area, Gen Tukur Buratai added.

The military overran the militants’ last camp in Sambisa on Friday.

It had become their main base after they lost control of urban strongholds in north-eastern Borno state in 2015.

Many of the militants are thought to have fled to areas closer to the border with Niger and Chad before the camp fell, says BBC Hausa service editor Jimeh Saleh.

In an address to troops in Damasak town in Borno state, Gen Buratai said that troops were conducting a “mop-up operation” against Boko Haram in the forest, a former colonial game reserve.

“We are opening up roads in Sambisa forest to site a base. It is going to be one of our training centres in the country as well as ground for testing acquired equipment before putting them into operation,” he added.

There has been speculation that some of the Chibok schoolgirls kidnapped in 2014 were being held in the forest, after it was named by a small number of girls who escaped.

On Saturday, President Muhammadu Buhari said that efforts to find the remaining girls would be intensified.

He congratulated the armed forces on the Sambisa operation, calling the apparent success “long-awaited and most gratifying”.

The militant group, which is linked to the so-called Islamic State, still stages suicide bombings in the north-east and in neighbouring Niger and Cameroon.

More than 15,000 people have been killed and two million left homeless during the seven-year insurgency in the region.