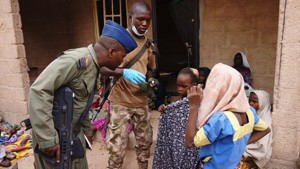 Nigerian troops have rescued a dozen of women and children earlier kidnapped by Boko Haram in the northeast region of the country, the army headquarters said on Tuesday.

Troops advanced Tuesday to clear all known Boko Haram terrorists camps toward Banki, Kumshe and Bama axis in the Nigerian state of Borno, further securing a “very important bridge linking the towns of Miyanti and Banki” said the army statement.

“The clearance by ground troops and aerial bombardments by the Nigerian Air Force continues till we reach the desired objective of defeating the terrorists,” the statement added.

Nigerian troops have recently stepped up their game to defeat Boko Haram, a terror group which has proved to be a hard nut to crack in the last six years.

Nigerian leader Muhammadu Buhari, who is currently on an official visit to France – where he will also seek support of the French government in the fight against Boko Haram, has ordered military chiefs of the West African country to crush the terror group latest by December.