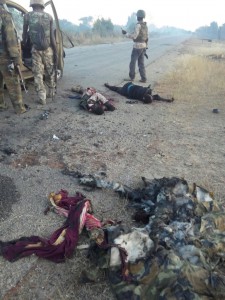 In  a battle that lasted over 3 hours, Gallant troops of the Nigerian Army repelled an attack by Boko Haram terrorists.

The Army overpowered the terrorists with superior firepower. The terrorist sect members launched their attack from Sambisa Forest opened fire on troops at about 4am

Many arms and ammunition were recovered, at the time of this report, calm and order has returned to Gwoza.