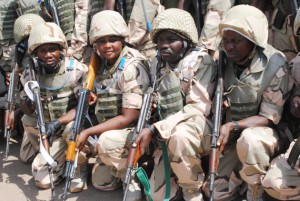 The Nigerian military, in one of its deadliest encounters in recent weeks, killed over 100 fleeing Boko Haram terrorists, who in the early hours of Tuesday made a futile attempt on taking the 120 Task Force Battalion located in Goniri, Yobe State.

The military, however, lost seven of its soldiers in the process.

Director of Army Public Relations, Col. Sani Usman, who confirmed this yesterday, said during the encounter, the Nigerian troops successfully repelled the attackers and inflicted heavy casualties on the invading terrorists as all of them were killed.

“In the last count, over 100 bodies of terrorists were seen. Unfortunately, seven of our gallant soldiers paid the supreme price while defending our fatherland, while one officer and eight soldiers were wounded in action,” Usman disclosed.
During the encounter, he said the troops recovered sizeable arms, ammunition and other equipment from the terrorists.

According to him, these included one general purpose machine gun, two rocket propelled grenades, nine AK-47 rifles, and belted rounds of 7.62 (NATO) ammunition.
“Others were various wires used for improvised explosive devices (IEDs), seven primed IEDs, different types of spanners and a torch light,” he added.

The army spokesman however said that the troops consolidated on the encounter and were more determined to defend their location, and continue to serve as a blocking force to any fleeing terrorists from the Nigerian Air Force (NAF) aerial bombardments and other troops’ artillery fire.
He further revealed that troops of 21 Brigade on fighting patrol from Bama to Ngurosoye destroyed Boko Haram camps along the axis.

While on patrol, Usman said the soldiers came across some of the terrorists’ hideouts that also served as fabricating area for IEDs and training area.
He revealed that another patrol along Bama-Kawuri axis discovered and exhumed IEDs and wires for detonation.
He assured Nigerians that the Nigerian Army, with the support of the Nigerian Air Force and other security agencies, would not relent in its determination to defeat the Boko Haram terrorists.

Despite the assurance given by the army, news reports filtered in last night that fighting broke out again yesterday in Gaidam Local Government Area of Yobe State between Nigerian troops and the terrorists.
Gaidam is the hometown of the state Governor Ibrahim Gaidam and is about 180 kilometres from the state capital, Damaturu. It is also a border town between Nigeria and the Republic of Niger.
Terrified residents said sporadic gunshots were heard in the town.

A resident said he noticed the movement of seven pickup vans moving through the town believed to be conveying members of the terrorist group.

A resident said: “There had been ceaseless shooting. Everyone is indoors right now and no one can say exactly what is happening outside but I saw seven pickup vans coming into the town from the direction of Niger Republic.”

Another resident said they learnt military re-enforcements were coming from Gashua and Damaturu but that could not be confirmed.
The military spokesman was not immediately available for comment.

But the Police Public Relations Officer (PPRO) in the state, Toyin Gbadegesin, an assistant superintendent of police (ASP), who confirmed the attack, said: “The militants are currently making efforts to invade the town but security forces on the ground are well in control of the situation.”
The PPRO said security forces were well aware of their responsibility of protecting the lives and property of the people and urged them to remain calm and go about their normal businesses.

He also called on the people “to continue to partner with security agents towards the restoration of peace in the state and the country at large”.

This is just as the police confirmed the killing of 18 persons in yesterday’s early morning multiple suicide attacks on the Yobe capital, Damaturu.

The police also said the attack left eight persons injured and needing treatment.
It was however independently gathered that three out of the eight injured persons were referred to Dala Orthopaedic Hospital in Kano.
Gbadegesin, who spoke to journalists a few hours after the attack, said the number of casualties stood at 18 persons dead and eight persons wounded.

Gbadegesin said: “What happened this morning was caused by three suicide bombers who detonated their devices at three different places. There were two suicide attacks in different places at Buhari Estate while the third one took place at a Fulani settlement behind Zanna Zakariya Housing Estate all in Damaturu, the Yobe State capital.

“In the first blast at the Fulani settlement, 11 persons were killed, while the two others at Buhari Estate killed six people – four at the shopping centre and two near a community mosque. One person later died at the hospital.”

Also throwing light on the incident, the Executive Secretary of the State Emergency Management Agency (SEMA), Alhaji Musa Idi Jidawa, told journalists that the attack was carried out by teenage boys at three separate places within the state capital.
He corroborated the police figure of 18 deaths including the suicide bombers, stating: “I can confirm to you that so far, we got 18 persons that have been confirmed dead. The number of wounded persons is 10.”

Reacting to the suicide bombings, the Yobe governor immediately directed that free medical treatment should be given to all victims involved in the attacks.
The governor, in a statement through his spokesman, Mallam Abdullahi Bego, also conveyed his condolences to the families of the victims of the attacks.

The statement read in part: “Governor Ibrahim Gaidam has expressed his deepest condolences and sympathies to the families of victims of the suicide bomb attacks in Damaturu today in which 18 people lost their lives and 11 others were injured.
“While praying for the repose of the souls of those killed, the governor has ordered immediate and free medical care for those who sustained injuries in the attack.”

He also condemned the attacks, describing them as “cowardly and barbaric”.
He commended the new approach in the fight against the insurgents by the federal government, and expressed his confidence that the crisis would soon be over.

Gaidam also commended the support of the people of the state for the security agencies and urged them not to relent in their support while praying for the return of peace in the state and the country at large.
The Damaturu bombings came on the heels of similar attacks on two mosques in Borno State on Tuesday night, leading to the death of over 20 persons.

A member of the youth vigilante group in the state informed THISDAY yesterday that the explosions occurred at 7.30 pm when Muslims were entering the mosques for the evening prayer.

He said the blasts were caused by bombs believed to have been planted by suspected members of the Boko Haram group.

A hospital source also revealed that his management was informed about the incident and the corpses were expected.
He said: “The incident has been reported to the authority while arrangement for the evacuation of victims to medical facilities within the state capital has been concluded.”
Meanwhile, Boko Haram leader, Abubakar Shekau, has again failed to appear in a new video released by the sect yesterday, the BBC has reported.

The video, which was posted on BBC’s Twitter handle, showed members of the deadly group pledging allegiance to the Islamic State, also known as the Islamic State of Iraq and Levant (ISIL).
A man, who spoke on behalf of the insurgents, however said that Boko Haram was still under the leadership of Shekau who was last seen in February.

He countered the fact that several insurgents had surrendered to the Nigerian Army.
The terrorist also said it was untrue that the army had released some women and children abducted by the sect.
According to the stand-in Boko Haram spokesperson, Nigerian troops, having failed on the battlefield, were now waging the war through the media.