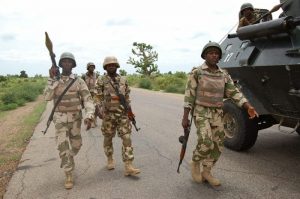 The Nigerian Army announced yesterday that its troops have killed two high profile Boko Haram commanders during joint operations by military formations stationed in Chibok and Damboa communities of Borno State, like reported by leadership.ng.

The Nigerian Army, which gave this hint on its official Facebook page, said Abu Rajal and Tuja Sa’inna Banki were killed during the joint clearance operations.

He noted that during the operations, the troops engaged the insurgents at Mude where the terrorists fled in disarray due to the superior firepower of the troops, leaving behind 17 bicycles, one small solar panel, two Tecno phones, sets of bicycle spokes, 12 torchlights, five Adorline body jelly, one UNICEF bag, some foodstuffs, used spinners, cloths, four mosquito nets, four-litre jerry can of petrol, 10 blankets and eight prayer mats.

According to him, the Chief of Army Staff (COAS), Lt Gen TY Buratai has commended the gallant troops and urged them to carry out further incursions and clearance operations to ensure that the remnants of the BHT are completely wiped out.