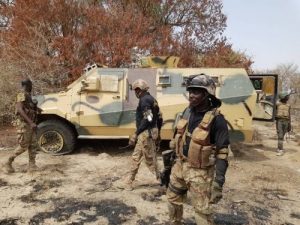 Nigerian Army troops attached to Operation Lafiya Dole, on Monday,  dislodged Boko Haram terrorists from Sabil Huda, their hideout in the expansive Sambisa Forest. The troop also freed 19 women and 27 children from captivity. The clear out was part of the ongoing Operation Deep Punch 11, which is aimed a dislodging the terrorists from all their hideouts, like reported by saharareporters.com.

The success of the troops was announced in a statement signed by Colonel Onyeama Nwachukwu, Deputy Public Relations Director of Operation Lafiya Dole Theatre Command.

“It is in this vein that they dislodged Boko Haram terrorists from one of their highly fortified hideouts around the S-shaped part of the Sambisa Forest close to Sabil Huda. The location was also believed to be one of their prized hideouts,” said the statement.

It added that the effort to dislodge the terrorists entailed a fierce offensive, which was supported by the Nigerian Air Force. The troops, the statement further disclosed, captured major armaments. These included two Spartan Armoured Personnel Carriers (APC), one Canter truck and one laptop computer from the insurgents.