You are here: Home / Africa / Nigerian soldiers in gun battle with Boko Haram fighters near Borno military base 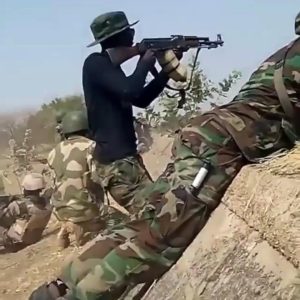 Troops of the Nigerian Army are currently in a gunfight with militants from the Islamic State-backed faction of Boko Haram, the Islamic State West Africa Province (ISWAP), formerly known as Jamā’at Ahl as-Sunnah lid-Da’wah wa’l-Jihād in Tamsukawu village, Kaga Local Government Area of Borno state, like reported by saharareporters.com.

The town is about 7 kilometres from Ngamdu, where the Super Camp of the Armed Forces is located.

The criminals, reportedly dressed in military uniforms, set up a checkpoint along Maiduguri-Damaturu highway around 10:30 am and stopped vehicles at a spot near Tamsukawu village.

Special task force units were said to have been deployed in the area.

“Air support and ground Troops from Super Camp, Ngamdu and Rapid Response Team have been promptly deployed to the scene and are currently engaging the terrorists,” the source said.

ISWAP, which split from the mainstream Boko Haram in 2016, has become a dominant group, focusing on military targets and high-profile attacks, including against aid workers.

With the death of Abubakar Shekau and the realignment of various factions, an interim committee was appointed to lead the ISIS Islamic Caliphate of Africa (Wilaya of Africa), covering parts of Nigeria, Chad, Niger and Cameroon.

The Nigerian army has repeatedly claimed that insurgency had been largely defeated and frequently underplays any losses.

The terror group has caused over 50,000 deaths and displaced millions of individuals mainly in Adamawa, Borno, and Yobe states.