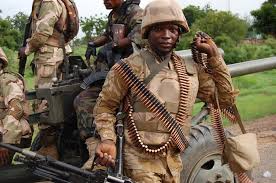 The Nigerian military on Saturday alerted Nigerians to a new tactic it said Boko Haram terrorists have adopted in launching successful suicide bombings in locations in the North-west.

In a statement made available to PREMIUM TIMES, the spokesperson for the defence headquarters, Rabe Abubakar, said terrorists, known for using young female suicide bombers to launch attacks, have now switched to disguising as mad people to infiltrate locations.

Mr. Abubakar, a brigadier general, said, “It has come to the notice of the Defence Headquarters that Boko Haram, in their desperation to cause colossal havoc, have now devised a new method where they dress like mad persons to gain unsuspecting access to public areas to detonate bombs.

“The two male suicide bombers, dressed like mad women and carried out suicide bomb attack in Gombi, Adamawa State, is instructive in this direction. Five people lost their lives and several others were wounded in the heinous attack by these ungodly people.

“The Defence Headquarters therefore urges our fellow good citizens across the country to be wary of mad persons approaching markets, public places or crowded areas so as to nip this ugly trend in the bud.

“Nigerians are also enjoined to be security conscious at all times and should endeavour to report any suspicious person or object to security agencies for prompt action.”

Meanwhile, a concerned group of Nigerians in Diaspora, based in the United Kingdom, has pledged to work with the Nigerian military through intelligence gathering and development of software needed for the counter-insurgency operations in the North East.

The group, led by the Chairperson of the House of Representative Committee on Diaspora matters, Rita Orji, made this pledge at the Defence Headquarters Abuja, during the presentation of an award to the Chief of Defence Staff, Gabriel Olonisakin.

Ms. Orji stated said the award was given to Mr. Olonisakin, a general, in appreciation of the gallantry and doggedness of the military in keeping the nation united despite predictions of a break-up of Nigeria before the 2015 general elections.

She noted that Nigerians in Diaspora acknowledged the sacrifices members of the Armed Forces were rendering towards keeping Nigeria safe from insurgency and insecurity.

The award of gallantry presented to the Chief of Defence Staff, according to Ms. Orji, was to say thank you to the members of the Armed Forces through the CDS so as to spur the military to do more.

Receiving the award, Mr. Olonisakin thanked the group for identifying with the military, especially at this trying period in the nation’s history.

He said the award was for the Nigerian military, both the dead and the living, as well as members of their families who also bore the brunt of the insecurity in the North East and other parts of the country.

The defence chief noted that terrorism was a global phenomenon and therefore urged Nigerians in the diaspora and international community to rise up to challenges and join hands to wage war against insurgency and terrorism.

Present at the occasion, apart from the group of Nigerians in diaspora, were some members of the House of Representatives Committee on Diaspora matter and the principal staff officers of the defence headquarters.